Time for a crew change. 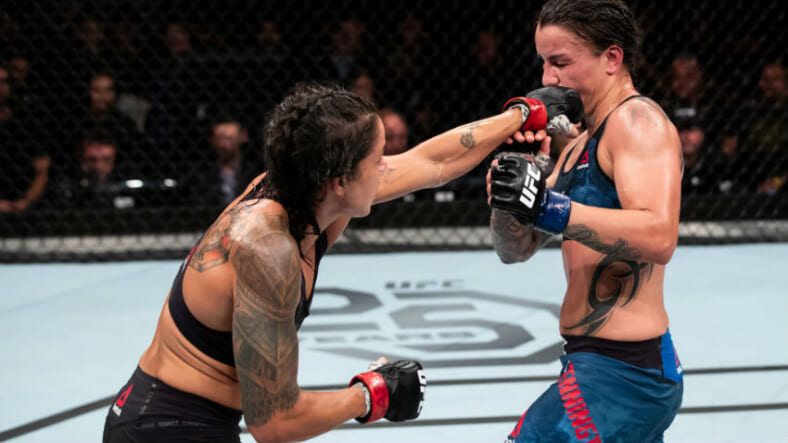 UFC 224 in Rio could’ve been a relative snooze—MMA is always exciting, but some matchups can be predictable—but the main event between Amanda Nunes and Raquel Pennington stood out more for one fighter’s lousy crew than the fighter’s abilities.

By round 4, Pennington was coping with a broken nose. She was flagging, and she was ready to tap out. Her coach somehow managed to con her into fighting on. Many MMA fans watching the match thought that was a bad idea. In fact, they thought it was bad coaching—even Amanda Nunes agreed. Three tweets tell the story.

Raquel Pennington is finished in the fifth round just moments after telling her corner "I'm done" 🤔 #UFC224 pic.twitter.com/wU52xiCaLE

Amanda Nunes is a savage, look at this blood bath #UFC224 pic.twitter.com/aSRxzPfg1y

That’s right, it took no time at all Nunes to turn Pennington’s face into hamburger.

Nunes bloodies Pennington with a knee at the end of the fourth. Pennington, in her corner, says she’s done. Coaches telling her to change her mindset. #UFC224

Fuck Pennington’s corner. She wanted out of there after RD 4, and her corner told her to continue with a broken nose in a fight she wasn’t going to win, terrible stuff, protect your fighter. Nunes looked great #UfC224

They should have never let her go into the 5th round like that.

Amanda Nunes was by far the favorite to win this fight. After all, she’s the current women’s bantamweight champ for a reason. And in the early rounds, this was obvious. Pennington’s morale was breaking along with her nose—coaches telling her to change her attitude were crazy.

Speaking after her victory, Nunes was blunt. “It’s sad,” she said, “You could avoid something. She went to the hospital. It might be a bad injury for her to go to the hospital…if she needs anything I’m here. It’s sad.”

The verdict from those covering the match was pretty much the same. The writer covering MMA for Forbes wrote that “Pennington’s team failed her in two ways. The first, they offered her no advice on how to improve her situation inside the octagon where she had been overpowered by UFC women’s bantamweight champion Amanda Nunes for the first 20 minutes of their title fight.”

Nunes also said something everyone could agree with. “I really think she needs to surround herself with people who want the best for her so she can really evolve for her next fights.”

Looks like Raquel Pennington should take a hard look at those supporting her when she’s in the Octagon.

She’ll have to recover from that broken nose first.