“It’s just not right to send cheerleaders out with strange men.” 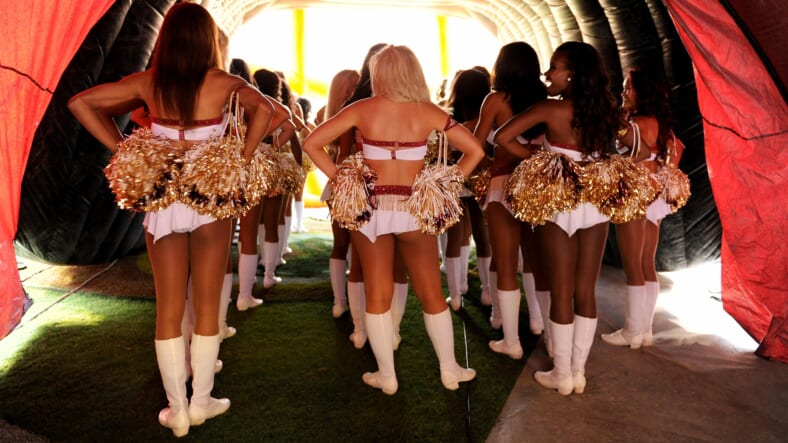 Life as an NFL cheerleader sounds like the pits. For years, we’ve heard how they’re underpaid, overworked and treated unfairly. And now the New York Times brings us a damning story about how the Washington Redskins sex trafficked their cheerleaders. Really.

The saga begins with the team flying its cheerleading squad to Costa Rica in order to shoot a calendar. Nothing wrong yet—other than the team not paying the women for their work—but that changed quickly. The cheerleaders were required to go topless during the shoot, even though there would be no nudity in the calendar. Making it extra creepy was the presence of an all-male crew of sponsors and suite holders, who were allowed to gawk at the cheerleaders’ bodies.

One evening, at the end of a 14-hour day that included posing and dance practices, the squad’s director told nine of the 36 cheerleaders that their work was not done. They had a special assignment for the night. Some of the male sponsors had picked them to be personal escorts at a nightclub.

“So get back to your room and get ready,” the director told them. Several of them began to cry.

“They weren’t putting a gun to our heads, but it was mandatory for us to go,” one of the cheerleaders said. “We weren’t asked, we were told. Other girls were devastated because we knew exactly what she was doing.”

The cheerleaders told the Times that they were not expected to have sex with the men they went out with, but they still felt as if the team was “pimping us out.”

“It’s just not right to send cheerleaders out with strange men when some of the girls clearly don’t want to go,” one cheerleader told the Times. “But unfortunately, I feel like it won’t change until something terrible happens, like a girl is assaulted in some way, or raped. I think teams will start paying attention to this only when it’s too late.”

Stephanie Jojokian, the director of the team’s cheerleading program denied that account. “I was not forcing anyone to go at all,” she said of outing to the nightclub. “I’m the mama bear, and I really look out for everybody, not just the cheerleaders. It’s a big family. We respect each other and our craft. It’s such a supportive environment for these ladies.”

But the “ladies” are sticking to their story, which they said involved a long night of dancing, drinking and being mistaken for hookers.

It’s not the only story they have either. They also told of team meeting in 2012 that was held on a wealthy man’s yacht and felt more like Spring Break than a company retreat.

Five cheerleaders characterized that 2012 team-bonding party as a wild gathering, where men shot liquor into the cheerleaders’ mouths with turkey basters. Below the deck, men handed out cash prizes in twerking contests. No cheerleaders claimed that they were touched inappropriately, and the two team captains said the trip was pleasant. One added, “They were all adults and got out of the experience what they wanted to get out of it.”

In a statement, the team didn’t confirm or deny the allegations, saying that, “The Redskins’ cheerleader program is one of the NFL’s premier teams in participation, professionalism, and community service.”