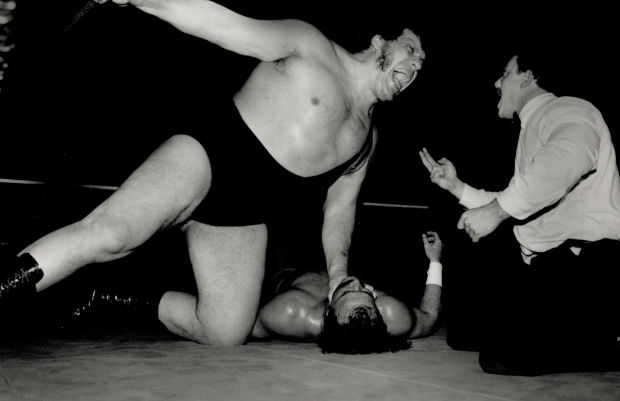 Before he was “The Nature Boy,” Ric Flair was a doughy Midwestern boy trying to make a name for himself in the American Wrestling Association. Not exactly the kind of dude ladies are desperate to hook up with. But as Flair told ESPN’s Dan le Batard this week, he had a secret weapon when he was hitting the clubs in the early 70s—Andre the Giant.

Here’s how his pitch went: “Big Foot’s here and I’m with him too so if you’re taking him honey, I can get me a friend.”That’s right, Flair says Andre was “the best” wingman a guy could ever ask for.

There was a lot about the 7-foot-4, 500-pound French behemoth that caught the attention of ladies, from Andre’s eye-catching size and unmatched charm to his ability to guzzle a ridiculous 106 beers in one night (listen to Flair recount of such an evening in the video below). But the thing that interested women most about Andre, at least in those early years was their curiosity about his giant-sized endowment.

“I imagine the ladies were dying to know whether he was proportional or not,” le Batard says.

“I made sure they knew he was,” Flair said. “Are you kidding? I think I wore a sign around my neck. Want some, come get some. Take little Ricky with you too.”