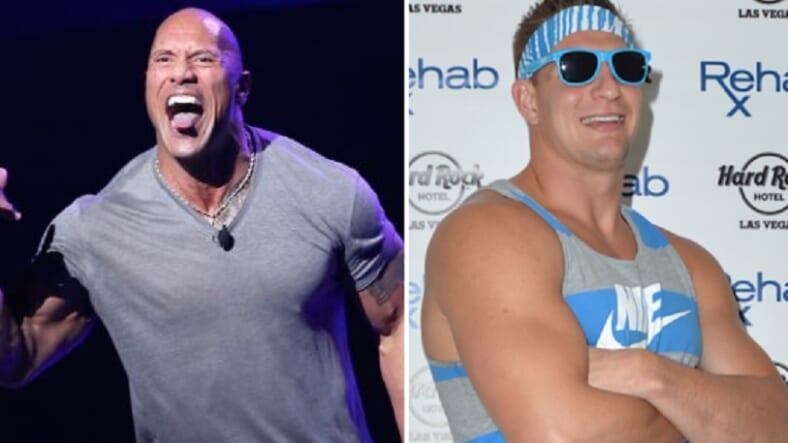 New England Patriots tight end Rob Gronkowski isn’t 30 yet, but his career as one of the best players in the NFL has taken its toll. He’s been injured badly enough to miss several games a season in the past—and according to a report in the North Andover, Mass. Eagle-Tribune, he might be considering a move into acting.

Yeah, we don’t know how that might work, either. But the same paper reports Gronk has been encouraged by no less than Dwayne “The Rock” Johnson and Sylvester “Rocky” Stallone to make the move. That’s a lot of rock.

Gronk has done a little acting in the past. He was in the Entourage movie, and he’s appeared in other productions.

There was his anti-Tide Pod consumption PSA.

What should Tide PODs be used for? DOING LAUNDRY. Nothing else.

Eating a Tide POD is a BAD IDEA, and we asked our friend @robgronkowski to help explain. pic.twitter.com/0JnFdhnsWZ

He was unforgettable in this video by 3LAU.

And Gronk totally killed it when he donned a Bon Jovi-like wig and covered “Livin’ on a Prayer.” Sort of.

Most relevant to action superstars like Johnson and Stallone suggesting Gronk really go for it as an actor, however, is the following video he did with the Rock to promote Baywatch. It was more like Gronk out with your Rock out here. Or something.

With a sizzle reel made up of the clips above, will Gronk take his show to Hollywood, or will he remain on the gridiron?

Looks like we’ll just have to wait till next season to find out.