Ronda Rousey and Jon Jones May Both Be Heading to the WWE, And This Could Be Amazing

And it’s all because of Brock Lesnar… 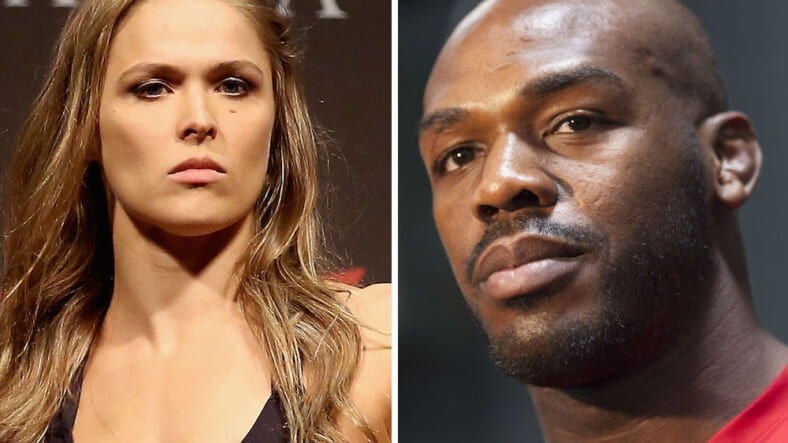 It’s been ages since we last heard from Ronda Rousey, who was the most famous UFC fighter in the world just a year and half ago.

But ever since last December, when Amanda Nunes turned her into a bloody pulp in less than a minute, Rousey has been absent from the public eye.

That may soon change. According to Fightful.com, Rousey has expressed interest in joining the WWE and the McMahons are eager to make it happen.

“According to sources, WWE had referred Rousey and company to current superstar Brian Kendrick for training purposes in Southern California,” the site says.

If Rousey is already training, then an appearance in the ring might not be very far off. And the Fightful report isn’t the only thing pointing that direction. Rousey was also seen last month with Triple H at a taping of the WWE’s Mae Young Classic, the all-woman wrestling tournament. Peep her sweet Randy “Macho Man” Savage muscle shirt.

The #MaeYoungClassic will celebrate and showcase female competitors from around the world. Great to have @RondaRousey join us tonight. pic.twitter.com/dQy9C1qFbH

Then, last week, the WWE’s Jim Ross told TMZ that Rousey teaming up with the WWE is “inevitable.”

“Oh, she’s gonna be a big star,”he said. “I see her in a WrestleMania someday.”

It's crossed my mind https://t.co/xlnbywH1y2

The 30-year-old said on Twitter that he’s given some thought to appearing at Summerslam in Brooklyn on August 20.

Part of the gimmick with Lesnar’s planned match at Summerslam, which has him taking on Braun Strowman, Samoa Joe and Roman Reigns in a Fatal 4-Way match, is that he’ll leave the WWE entirely should he lose.

Given that stipulation, it might be fun to see Jones there to show Lesnar what he has to look forward to if his days with the WWE do in fact come to an end.

Or maybe Jones is just dicking around with his fans on Twitter.