The cringeworthy clip is going viral. 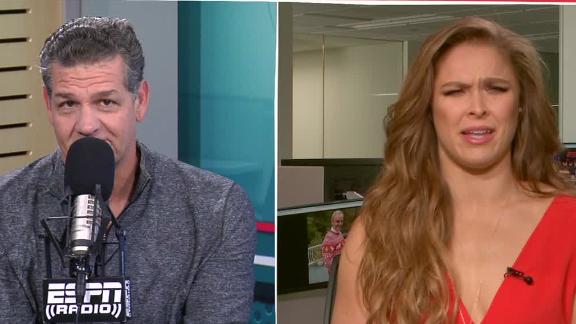 When Ronda Rousey made her debut in the WWE earlier this year, it seemed to answer once for all the question of whether she’d ever find her way back to the Octagon.

“This is my life now,” she told ESPN at the time, making it pretty clear that Rousey’s MMA career was behind her.

But maybe it’s not. In an appearance Tuesday on ESPN’s Golic and Wingo, Rousey refused to say that she’s done with MMA. She also made things awkward with Mike Golic by pretending he’d asked her about her ability to time travel.

Here’s how the exchange went:

Golic: Let’s go back and start when you knew from the MMA when you were done there. When you knew in your mind, “I’m not going to fight anymore?”

Rousey: I never said that.

Golic: Ah, so there is a possibility that you could go back, in time?

Rousey: There’s a possibility that I could go back in time? That’s your question to me?

Rousey: I do not have the ability to go back in time, no.

Golic: Would you fight again?

The first is Rousey’s unwillingness to shut the door on her MMA career. It’s been 15 months since she’s fought, and she has repeatedly said things that make a return to the Octagon sound unlikely. But if the end of her MMA career was certain, why didn’t she just say so when Golic gave her the chance?

The second piece of news, which will be much more interesting to wrestling fans, is that Rousey may finally be learning to be the heel that the WWE wants her to be. In her brief run in the WWE, she hasn’t yet handled the mic very well.

But if she can enter the ring as the same annoyed, sneering villain she was on Golic and Wingo, then maybe she’s got a shot.