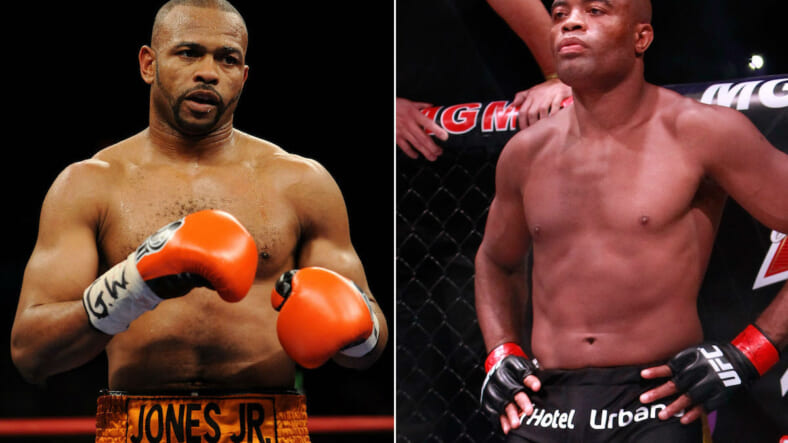 If you’re the type to get psyched about fantasy fights that will never happen, you’re going to love this story because it’s got two of them. You are, no doubt, already aware of the first fictional throwdown, which will pit Conor McGregor against Floyd Mayweather just as soon as pigs fly. The second, a proposed undercard to the first, was just pitched Wednesday and it comes from the mind of boxing great Roy Jones Jr.

Roy Jones vs Anderson Silva and Mayweather vs McGregor double headline card UFC invasion. Would be biggest event of all time period

The 48-year-old Jones, who just fought last weekend, stopping journeyman Bobby Gunn in the eighth round, has actually been talking about fighting Silva for years. Way back in 2013, when McGregor was a nobody, Jones was calling out Silva to meet him in the ring. He later blamed the difficulty of making it happen on Silva’s UFC contract. Sound familiar?

Unrealistic as the Jones vs. Silva fight is, we’d be far less surprised to see it become a reality than the McGregor vs. Mayweather match everyone’s so excited about. Unlike McGregor and Mayweather, who are at two different ends of their careers, Jones and Silva are both ancient and well past their primes. They’d both likely benefit from a publicity stunt like this.

Speaking of publicity stunts, McGregor and Mayweather have somehow not run out of energy to continue theirs. The latest ploy for attention comes from McGregor, who recently called out Mayweather for not meeting him in Vegas.

“Floyd’s a bitch and he’s petrified,” McGregor told TMZ in Vegas earlier this week. “I flew to Las Vegas and he didn’t show his face. As soon as I touched down in Vegas, he retired twice. He retired twice.”

But maybe he’ll get the face-to-face he so desires. After failing to meet up Vegas, both men are now in Los Angeles.