Bailey Davis is suing the team for discrimination. 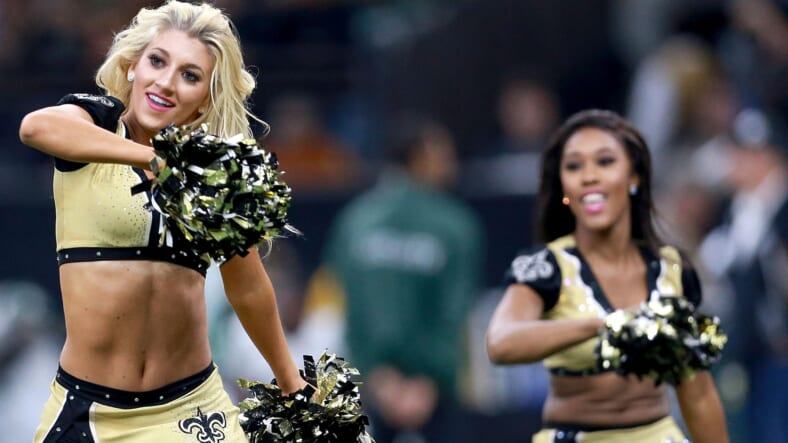 A former New Orleans Saints cheerleader claims she was fired for posting a photo of herself in a one-piece outfit to her private Instagram page.

Bailey Davis performed with the Saintsations for three seasons before she was accused of “very poor judgment” by their senior director Ashley Deaton for posting the picture, according to an investigative report by the New York Times.

“Very poor judgment to post a picture like that especially considering our recent conversations about the rumors going around about u,” Deaton reportedly texted Davis shortly before firing her.

“This does not help your case. I’d expect you to know better” she added.

The “rumors” alleged that Davis had attended a party with an NFL player, which she denies. In addition to rules that prohibit cheerleaders from appearing nude, semi-nude or in lingerie, they are barred from fraternizing with NFL players.

According to the Saints’ handbook for cheerleaders, as well as internal emails and text messages reviewed by The New York Times and interviews with Davis, the Saints have an anti-fraternization policy that requires cheerleaders to avoid contact with players, in person or online, even though players are not penalized for pursuing such engagement with cheerleaders.

Davis has filed a complaint with the Equal Employment Opportunity Commission in which she argues that the Saints’ rules for players and cheerleaders creates a discriminatory double standard.

Per the New York Times, “The complaint accuses the Saints of having two sets of rules — one for the team’s cheerleaders, who are all women, and another for its players.”

“The antiquated stereotype of women needing to hide for their own protection is not permitted in America and certainly not in the workplace.”

The NFL has yet to comment on Davis’ claims. Leslie A Lanusse, a lawyer representing the Saints, denied that Davis was discriminated against in an email to the Times.

“The Saints organization strives to treat all employees fairly, including Ms. Davis,” Lanusse said. “For now, it is sufficient to say that Ms. Davis was not subjected to discrimination because of her gender.”

An arbitration hearing and court case filing will follow. Davis says she hopes her actions will change the way the Saints treat their employees for the better.

“I’m doing this for them so they can do what they love and feel protected and empowered, and be a female athlete and not be pushed to the side and feeling unimportant,” Davis said.