The controversial decision has fans calling for an immediate rematch. 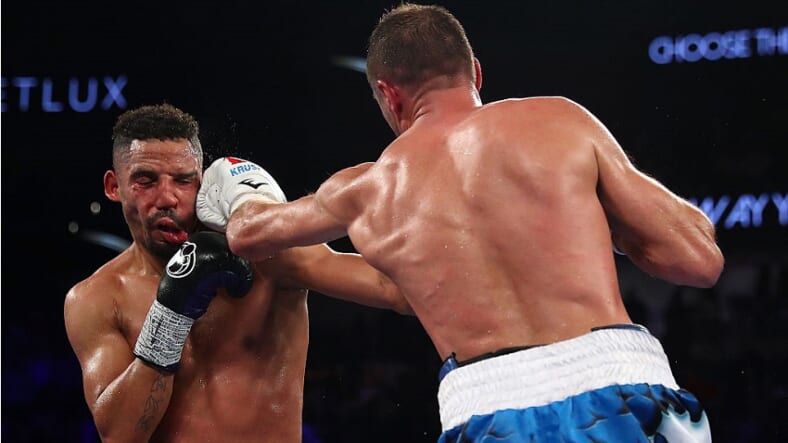 Russian punching machine Sergey Kovalev knocked him down in the second round and pressured him all night, but California’s Andre Ward battled back to win a razor-thin decision on Saturday night.

Ward, an undefeated 2004 Olympic gold medalist who hasn’t lost since he was a 12-year-old amateur, won 114-113 on all three judge’s cards to clinch the IBF, WBA and WBO belts after the light-heavyweight superfight in Las Vegas. The winner could also lay claim to the mythical mantle of the world’s best pound-for-pound boxer, though the controversial victory was too hotly debated for Ward to assert that with authority at this point.

“In a tight fight, [Kovalev is] going to feel like he got robbed,” Ward said. “I’d have been been disappointed. But we got the belts tonight.”

The previously unbeaten Kovalev blasted the judges’ decision that handed him his first professional defeat.

“It’s the wrong decision,” Kovalev said. “I don’t want to say my opinion. The witnesses are here. They saw it. It’s my job. It was a fight of my life I am disappointed in the judges decision. He got maybe a few rounds. I agree with that. I kept control. I lost maybe three rounds the whole fight.”

Ward will have to win again to remain champion. Kovalev has a rematch clause and the Russian’s promoter, Kathy Duva, said she’d exercise it. “We have 30 days to make the decision and we’ve already made it,” she said after the fight.

Kovalev’s fearsome punching power was certainly on display. He rocked Ward in round 1 then in round 2 connected with a powerful right hand that put the Californian on the canvas. From then on it was a more careful, tactical bout for Ward—one of boxing’s most skilled practitioners—and he used his ring smarts to get back into the fight, reports Yahoo! Sports.

But around the fifth round, two things changed. Kovalev quit using his right hand for the most part and Ward did what the truly great fighters do: He figured out the distance, he figured out the angle and he changed the way the fight was fought.

Kovalev kept charging forward but Ward spun and slipped out of danger. And Ward found a home for his jab, raking Kovalev repeatedly with his jab.The bout largely turned into a jabbing contest and Ward won it easily. According to CompuBox, Kovalev landed just 19.8 percent of his jabs, while Ward landed 32.7.

Kovalev threw 137 more punches, but landed just 10 more, as Ward repeatedly made him miss over the second half.

As far as Kovalev was concerned, though, the three American judges were already in the corner of their countryman. “I’m a guest here in the USA and he’s a local,” said Kovalev, who fell to 30-1-1. “And all the judges are from the USA. I agree they support their boxer but honestly, this is sport. Don’t make it like politics.”

With opinions on the bout being so divided, we are pretty much guaranteed that re-match. Kovalev took home $2 million for his trouble, but he’ll surely be back soon, looking for a bigger purse, ready to wear those belts again.