“Whenever you see something wrong going on anywhere in the world, you should have the right to say, ‘that’s not right.'” 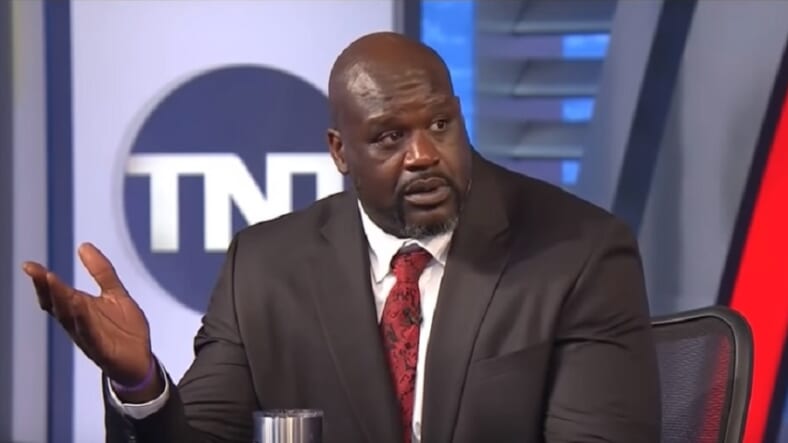 The NBA has been profiting from China‘s appetite for basketball for a while now—or it was, until Houston Rockets GM Daryl Morey expressed sympathy on Twitter for the thousands of protesters who have been demonstrating in Hong Kong for weeks.

This sparked a lot of controversy and big-name NBA luminaries like LeBron James, who was roundly criticized for seemingly siding with China, and now Shaquille O’Neal has weighed in. LeBron took Morey to task and was roundly criticized. Shaq looks at the situation differently and just before the NBA’s first game of 2019-2020 he defended Morey from the Inside the NBA announcer’s desk.

Shaq on Daryl Morey/China "One of our best values here in America is free speech we're allowed to say what we want to say and we are allowed to speak out on injustices and that's just how it goes. and if people don't understand that that's something they have to deal with. pic.twitter.com/vefcHSPlMD

“Daryl Morey was right,” Shaq said, then elaborated on the reasons why.

“We, as American people, do a lot of business in China, and they know and understand our values and we understand their values,” he said, “And one of our best values here in America is free speech. We’re allowed to say what we want to say, and we’re allowed to speak up about injustices, and that’s just how it goes.”

“If people don’t understand that,” Shaq continued, “that’s something they have to deal with.”

The 7-foot-4 Lakers legend said he understood that sometimes doing business can require tiptoeing around some things, but “we have the right to speak, especially with social media — we can say whatever we want to say, when we want to say it.”

He went on to say, “Whenever you see something wrong going on anywhere in the world, you should have the right to say, ‘that’s not right.'”

Morey expressed his support for Hong Kong protesters in a now-deleted tweet, and shortly after that LeBron James said the GM lacked proper knowledge of the situation. The backlash was immediate—and for James, rarely a controversial figure—surprising.

Let me clear up the confusion. I do not believe there was any consideration for the consequences and ramifications of the tweet. I’m not discussing the substance. Others can talk About that.

He was accused of thinking money was more important than lending moral support to protesters seeking freedom from perceived government oppression. He tried to fix the situation—with mixed results—in a with a tweet:

Protests in Hong Kong began over a new set of laws that would have permitted extradition to China, then over time morphed into ardent pro-democracy demonstrations—a lot of people telling China to keep their laws out of Hong Kong’s homes.

China has cut numerous ties to the NBA over Morey’s tweet—it no longer streams games and doesn’t allow Chinese companies to advertise with the league.

NBA commissioner Adam Silver said he felt Morey’s comments were “unfortunate” but did not offer an apology on the league’s behalf.

It’s good money that Shaquille O’Neal won’t express any regrets for his statements. If you were his size you wouldn’t say you’re sorry about much either.