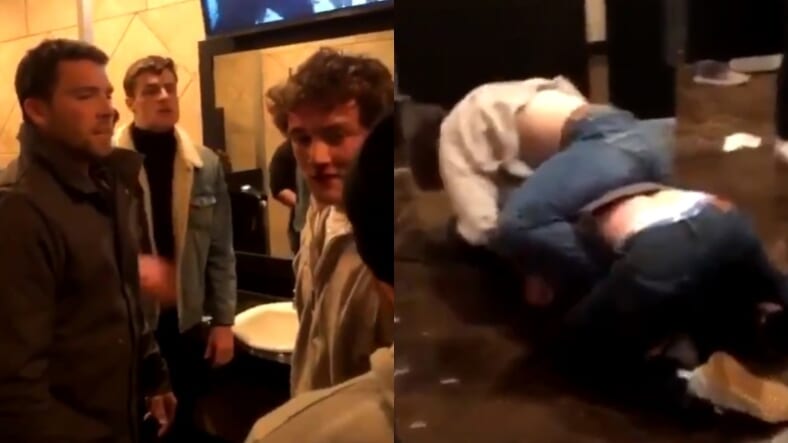 A University of Oklahoma football player has lawyered up after “nearly losing an eye” in a wild viral bar fight with a fellow student who has a background in wrestling and MMA.

One upload of the widely-seen video posted to the Old Row Oklahoma Twitter account has already been viewed more than 7 million times. The two people opposite Sooners wide receiver Spencer Jones and the man in the jean jacket have self-identified on social media as brothers Walker and Braden Brown.

Was it really power hour if you didn’t get in a fight on the piss-soaked bathroom floor? pic.twitter.com/lWombEtc3g

With tensions already high at the start of the clip, Walker turns to Braden and says, “Which one do you want?”

As the Oklahoma University Daily notes, Jones yells “get the fuck out of here” and “what you got?” at the brothers. The man in the jean jacket then pushes Walker, who, after wiping what appears to be his already bloodied nose, uncorks three right hands that can be heard landing on Jones.

From that point, Walker and Braden handily subdue Jones and the man in the jean jacket with takedowns, ground-and-pound, and chokes. Days after the altercation, an oral and maxillofacial  specialist performed surgery on Jones’ left orbital socket, according to the OU Daily.

Jones’ family has retained legal representation from Woodrow Glass of Ward and Glass, L.L.P., who released a statement on the condition of his client.

Just to get rid of the misconceptions, I’m the fellow in the beanie and that is my brother. We ARE NOT wrestlers at any university, we have been wrestling since we were in diapers and MMA/Cage Fighting since we were 12. They gave us no options unfortunately. We showed restraint.

“[Dr. Perry Brooks] came out of that surgery saying he’s extraordinarily lucky at this point, that he’s lucky he didn’t lose the eye altogether,” Glass said. “And so he was able to do some things surgically to rebuild that orbital socket and thinks everything is eventually going to come back to normal, but it’s going to take a while for him to fully recover.”

Glass added that Jones was “trying to be a peacekeeper.”

“He was trying to de-escalate that situation,” Glass told the OU Daily. “But unfortunately, it wasn’t de-escalated despite his best efforts, and he became the victim of this vicious assault you’ve seen.”

Braden characterized the situation differently in his account of the events leading up to the brawl.

“Just to get rid of the misconceptions, I’m the fellow in the beanie and that is my brother. We ARE NOT wrestlers at any university, we have been wrestling since we were in diapers and MMA/Cage Fighting since we were 12.”

“They gave us no options unfortunately,” he added. “We showed restraint.”

UFC fighter Dillon Danis sided with the brothers, retweeting the video with the caption, “bully’s [sic] learning a lesson.”

Former NFL punter, WWE wrestler and sports analyst Pat McAfee also tweeted that Jones “learned a valuable life lesson” from a guy who knows “how to break your shit in about 15 different ways.”

Can’t be drunk fighting randoms anymore..nowadays even the dudes without cauliflower ears know how to break your shit in about 15 different ways

Spencer Jones learned a valuable life lesson this weekend.. The Affliction T-shirts might be gone but MMA folks are still amongst us.

Walker has since launched a GoFundMe to cover medical bills related to injuries sustained during the fight and legal fees.

“Hi everyone. I am the guy in the bathroom fight video. I have laughed with the funny comments about my cowboy boots and cauliflower ear,” he wrote on the fundraiser’s homepage. “I have not commented because there is an on-going investigation. I have been advised to get an attorney.”

“I am also facing a surgery from an injury I received while defending myself and will be looking at some unplanned medical bills and time off of work recovering from the surgery. I am a full-time student who works two jobs.”

Thank you everyone for the support! https://t.co/l8LUDOx11k

Walker also briefly addresses the fact that his nose was already bleeding before the viral video begins.

“I will say that YES, there was something that occurred prior to the start of the video as my nose doesn’t bleed for no reason. After I hire an attorney, I will make a statement so you will know my side of the story. Thank you again for all of the support.”

The “Help Walker With Attorney Fees and Medical Bills” GoFundMe had reached $6,604 of its $30,000 goal at the time of publication.