This Spanish Beach Horse Race Is the Oldest in the World 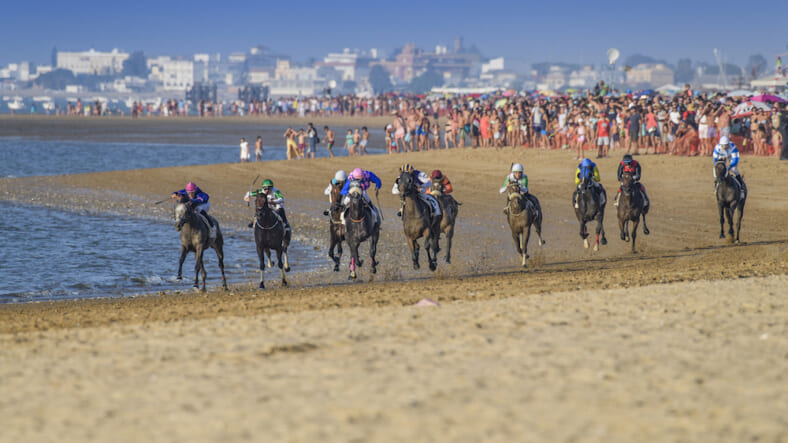 I’ve come to the Andalusian coastal town of Sanlúcar de Barrameda during heavy heat, as the Spanish say, for a fiesta called the Carreras de Caballos de Sanlúcar, or the Sanlúcar horse races.

Beneath a scorching empty sky the jockeys are warming up their thoroughbreds in a makeshift paddock above the beach where mostly male bettors—both dedicated race fans in smart attire (think immaculately pressed cotton shirts and trousers with Panama hats) and sunbathers in swim trunks (think board shorts with bare chests and Speedos with unbuttoned belly-baring shirts)—divine their odds and place their bets.

Down on the beach the scene is like that of any popular local seashore: Families of all ages, bodies of all sizes, children scurrying, mothers mothering, fathers napping, couples cuddling, young men posturing, and young women flaunting—their bronzed, olive bodies and long, thick hair evoking bikini-clad versions of Carmen. The comfortably crowded atmosphere is laidback owing to the occasion of summer holidays and the blazing afternoon heat.

The mounted jockeys in their bright colors are soon lead by mounted officers of the Guardia Civil through the crowds of onlookers and beachgoers down to the Mediterranean shoreline where they canter their steeds up the beach to the standing-start line.

This will be one of four races today of varying distances with the longest being 1800 meters, or approximately nine furlongs, which is just over a mile. As the horses pass, the crowds—numbering in the thousands and almost exclusively Spanish—are merrily ushered by other police officers up behind a low-lying plastic mesh fence that sits at the high tide mark where everyone’s umbrellas, towels and ice chests sit. Others swim or row out to boats anchored off shore.

A quiet hush descends as all wait for the sound of the starting gun. The way the beach curves, the horses can’t be seen until they round a bend midway, but once the shot is heard cheers ring out in the distance and quickly descend down the line. Anticipation builds as the cheers travel closer and the roar of the horses can be heard approaching. And then, as if by surprise, the riders explode around the bend and the ground shakes as they thunder by, seemingly just an arm’s length away, kicking up sand, some kicking up water, all of them flashing by in color and power while the crowd screams with excitement!

As the horses disappear into the distance the chattering crowds go back down to the water to splash and play and wait for the next race, four of which take place about an hour apart each day for three days, with the last ending just as the sun sinks into the sea.

The last contest of the evening is merely a segue to the next phase of the day. The town and streets swell back to life as the taverns and tapas bars begin to fill. With dinner starting around 10 o’clock, families with children don’t go to bed until well after midnight while the unencumbered head to a large pavilion tent erected near the sandy paddock for music (think Flamenco dubstep), drinks (sherry, cocktails and sherry cocktails) and dancing (raucous but never debauched). Most won’t trudge back to their beds until sunrise, with the following day repeating the same schedule.

Located on the southwestern coast of Spain, south of Seville, Sanlúcar is surprisingly easy to get to. Only a half hour away is Jerez, the sherry capital of the world, with its airport serviced by direct flights from many European cities thanks to the town’s MotoGP and F1 racetrack (where Schumacher infamously crashed his Ferrari into Villeneuve and was thereby disqualified from the 1997 World Championships).

At the end of the sweltering month of August when the entire country—and most of continental Europe for that matter—is closed for holidays, the sandy beach of Sanlúcar hosts these free-to-the-public races. These are not amateur runs, rather proper races sanctioned by a governing body, part of a national circuit of derbies, with thoroughbreds of pedigree and jockeys in silks. These are real races. The only difference, and the one that makes all the difference, is that it’s held on a beach.

Despite being the oldest beach horse races in the world (since 1845 in official sanctioned form but much older in practice), the Sanlúcar event isn’t steeped in pomp or tradition. Instead, much like the national attitude, it’s welcoming, casual and cheerful. This is a celebration of celebrating. Combining the lazy pleasures of the beach and the exhilaration of racing, it’s summer’s last hurrah. Everyone knows the return of their everyday routines is just around the corner and so it’s a countdown. The horse races are just part of the party, not the reason for the party.

On any day of the calendar somewhere in Spain there’s an official party. Some are better known than others, like La Fiesta de San Fermin in Pamplona that, although is just one of the country’s many running of the bulls, has become internationally synonymous with the celebration thanks to a novel written by a larger-than-life author buried in Idaho. Then there are others known generally to the cognoscenti, like La Tomatina in Buñol where revelers pack the city’s square and throw an estimated 100 metric tons of tomatoes in what’s known as the world’s biggest food fight. And then there are the dozens of other world-class fiestas around the Iberian Peninsula known only to locals.

Why so few people outside Spain know about these other fiestas is a mystery. Perhaps it’s because a famous author didn’t write about them or perhaps the nation’s board of tourism hasn’t vigorously advertised them. Whatever the reason, real or supposed, they are no less exciting and the beach horse races of Sanlúcar is a destination event on par with the best.

Immediately after each race, the word I heard most from the admiring presses was emocionante, which in Spanish means a combination of thrilling, moving and stirring.

As the riders of the final contest fly past me into the horizon, the pink-orange of the sinking sun lighting the calm sea metallic, and the roar of the moment still ringing, I couldn’t help but agree. Even the English word “emotional” is appropriate. To see such power and grace, such speed and beauty, all so close-up and framed by this spectacular setting evokes a poetic sense of moment.

For a fiesta to combine the pleasure of revelry with unexpected awestruck emotion, there is simply nothing anywhere else in the world like the glorious beach horse races of Sanlúcar.