“Obviously I was joking when I was talking on the podcast.” 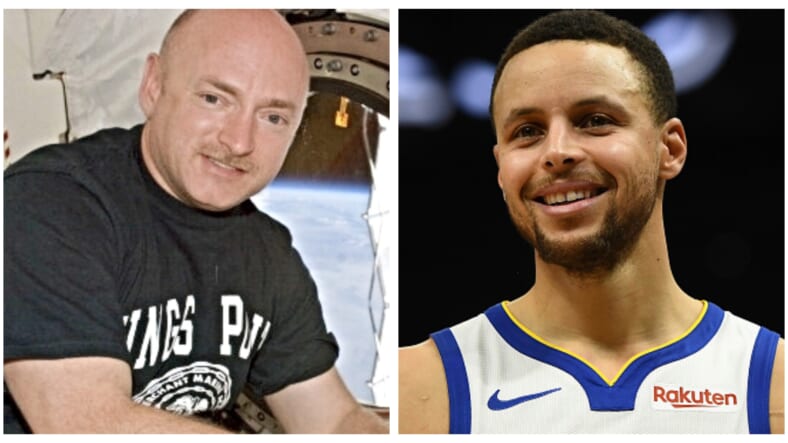 It’s Kyrie Irving’s fault. If the dude had never popped off about believing the world is flat or put Illuminati symbols on his signature kicks, we wouldn’t be here now discussing Golden State Warriors star Steph Curry, who recently used a guest spot on a podcast to express disbelief that man had ever gone to the Moon. Irving made this kind of wild-eyed stuff a thing among NBA stars.

Curry probably wasn’t actually serious.  “Obviously I was joking when I was talking on the podcast,” he told ESPN, As if to emphasize the fact he’s not secretly haunting Moonshot hoax message boards in the dark corners of the internet, he got together with astronaut Scott Kelly to talk it out.

Kelly is uniquely well-qualified to set Curry—or anyone who needs it—straight on the matter, as he—along with his brother Mark—has been one of the most visible faces of the astronauts who have spent huge amounts of time on the International Space Station.

In his ESPN interview, Curry referenced an offer from NASA to set him straight, and said in part, “I am definitely going to take [NASA] up on their offer. I am going to educate myself firsthand on everything that NASA has done and shine a light on their tremendous work over the years.”

So as you see in the video above, Curry spoke with Kelly over Instagram live, the latter acting as NASA’s rep, and they basically just geeked out on space science.

Kelly didn’t quite let a contrite Curry off the hook regarding his joke, saying, “When people believe [in crazy conspiracy theories], they believe the other things that are more important like climate change not being real or vaccines and 9/11 being a conspiracy theory.”

Everyone can move along now. Curry, one of the greatest basketball players of the 2000s, may not be whacko, just bad at signaling when he’s telling a joke.

Someone still needs to get through to Kyrie Irving, though.