Here’s Why Ronda Rousey Could Be Coming to the WWE

Once the UFC superstar retires, will she pull a reverse Brock Lesnar and become a pro wrestler? 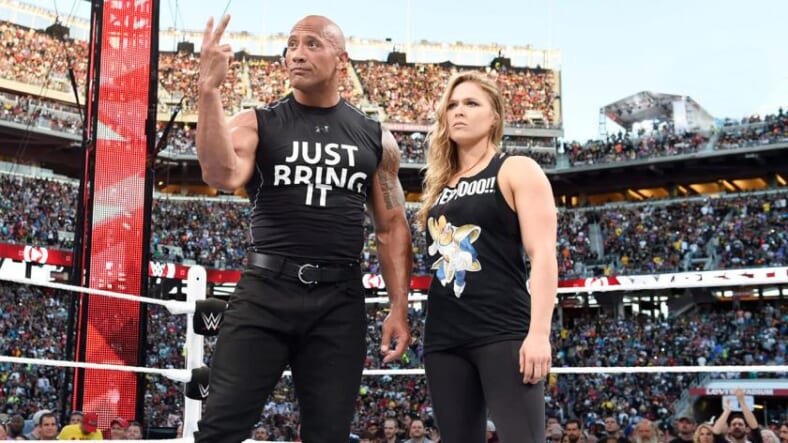 It’s hard to know what to make of Ronda Rousey’s recent promise that her upcoming fight against Amanda Nunes will be one of her last. Fighters love to talk about retirement and then stage elaborate comebacks. Just ask Conor McGregor.

But if Rousey does truly plan to call it quits with MMA, Stephanie McMahon may have a new home for her. The WWE executive was recently cornered on the street by a TMZ cameraman and asked about Rousey’s future should she leave the Octagon. Would she try to get Rousey in the squared circle?

“I certainly hope so. I gotta get her back after she put me in the arm bar,” McMahon said, referring to this immortal moment:

That’s a pretty non-committal response, but it does sound like the WWE would be interested in bringing Rousey on board. And it should be. If she joined the WWE, Rousey would immediately be the promotion’s biggest female star. As McMahon says in the TMZ video, there’s interest in expanding the women’s division and if getting women to headline Wrestlemania is a real goal, Rousey would be one way to get that done.

The WWE might make sense from Rousey’s perspective too. There would be much less risk for injury and she’d able to compete for years if she wanted to. Given how much money she’d likely make a part of the WWE roster, than would make her a very rich woman. That alone could be reason to leave the UFC behind.