The last one, which pegged him right in the melon, forced him out of the game. 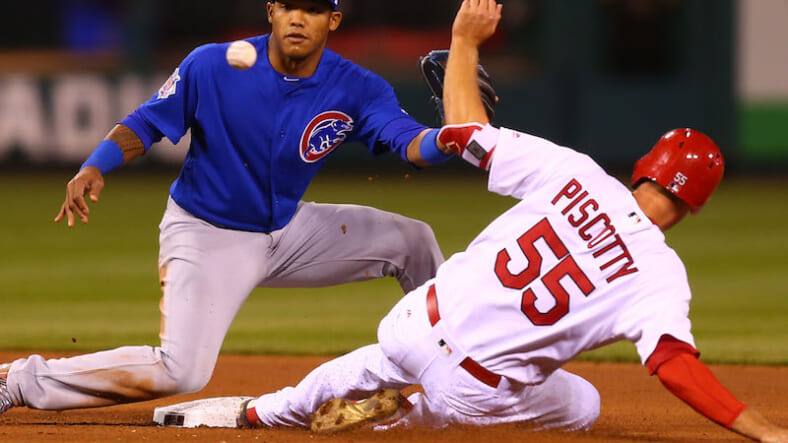 Every so often in baseball, a thing that it very unlikely to happen, happens. Think of the time a ball bounced off of Jose Canseco’s head and was ruled a home run. Or the time Randy Johnson blew a bird to bits with a perfectly timed heater. Or the time when Cardinals right fielder Stephen Piscotty was nailed three times in the same inning, once at the plate, once while stealing second and once while trying to score.

That third one happened Monday night in St. Louis, and each time Piscotty got beaned, the damage got worse. The first beaning came on an inside fastball from Cubs righty Jake Arrieta. Piscotty tried to jump out of the way, but the ball caught him on the right elbow.

The second beaning came after Piscotty took second on an Arrieta wild pitch. Cubs catcher Willson Contreras found the ball and fired it down to second, where it plunked Piscotty in his left elbow.

The last and most significant beaning came as Piscotty tried to score from second on a dribbler to second base. When the ball got past Javier Baez, Piscotty broke for home. Baez recovered and fired a laser to the plate, where the ball smacked into Piscotty’s helmet so hard that the damn thing popped right off his head.

Piscotty was removed from the game after that last one and was covered in bubble wrap for the rest of the night. He’s now in the MLB concussion protocol but figures to return to action before long. And when he does, he can rest assured that no matter how much longer he’s in the league, something as weird as this never happen to him again. That’s just how baseball works.