“They’re right,” Kerr said. His response only got better from there. 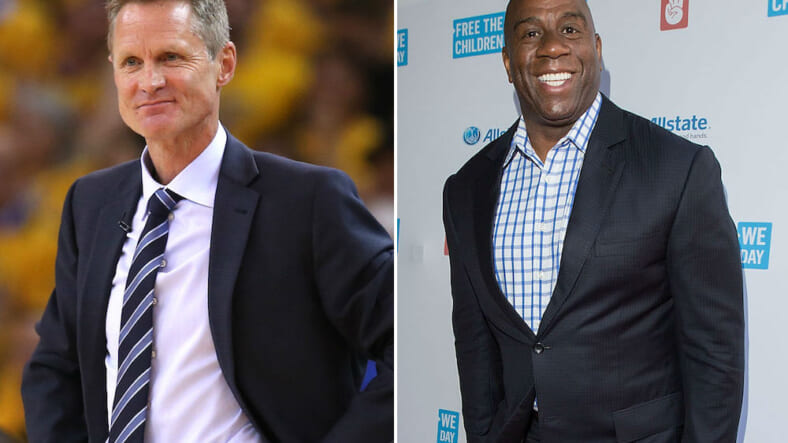 The only thing NBA legends like more than putting on 60 pounds is talking about how much better they were than today’s players.

And nothing gets them talking like the Golden State Warriors, a super team of once-in-a-generation talents on the cusp of doing something that no other NBA team ever has. With a win tonight, the Warriors will have gone 16-0 on their way to an NBA title, which is something that no NBA legend has ever been able to do.

No wonder they’re getting so salty.

Laker great Magic Johnson is the latest legend to pop off with a prediction about how his team would do against the Warriors. “We would probably sweep ’em,” he said. Sixers great Dr. J has also chimed in. “We would have figured out how to play against this team and how to beat this team,” he recently said.

Players have been responding to Magic’s claim all week, with a combination of dismissal and laughter. Here’s Draymond Green sharing his thoughts.

Now, head coach Steve Kerr has ended the debate forever with a hilarious take on the issue.

“They’re all right. They would all kill us. The game gets worse as time goes on. Players are less talented than they used to be. The guys in the 50s would’ve destroyed everybody. It’s weird how human evolution goes in reverse in sports. Players get weaker, smaller, less skilled. I don’t know. I can’t explain it.”