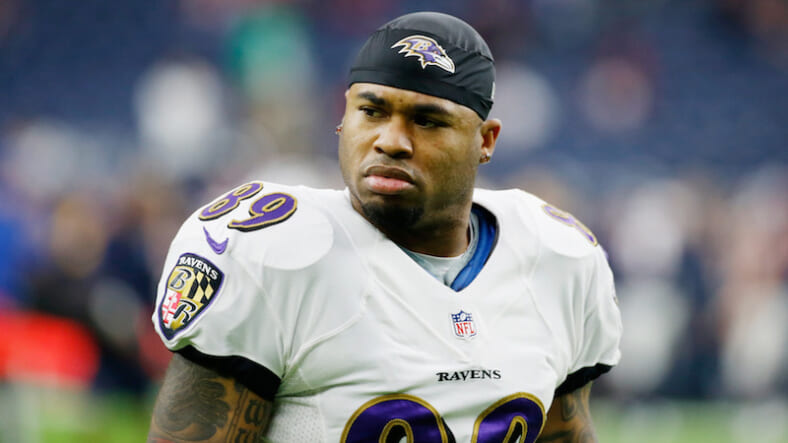 During this 16 years in the NFL, former Panthers and Ravens wide out Steve Smith Sr. developed a reputation as one of the most combative dudes in the league. And now that he’s retired, he’s apparently still got it.

Smith brought his raw intensity to the NFL Network as a broadcaster earlier this year and in addition to talking about football, the job requires him to rib and get ribbed by his co-workers.

But Smith isn’t much for ribbing, it turns out. On Thursday night, after a terrible game whose highlight was a cat running on the field, Michael Irvin goofed on Smith’s somewhat questionable plaid pants and the NFL Network rookie responded with a threat that sounded pretty serious to us:

“My wife loves you and she got mad at me for messing with you,” Irvin says in the video. “She’s going to make me sleep on the couch if I mess with any more, so I’m not going to say anything about those pants you’re wearing.”

After the Marshall Faulk’s laughter died down, Smith shot back. “When I come to L.A., I’ma whoop your ass,” he said.

Then, just in case Irvin didn’t hear him the first time, he said it again: “I’ma just whoop your ass when I see you again.”

What’s funny about this exchange is that Smith seems is completely serious. The man is pissed. Now, he might have a hard time whopping Irvin’s ass given the five inches the Cowboys great has on him.

But Smith is 13 years younger than Irvin and  he has plenty of experience whopping the asses of guys bigger than he is.