Can the Eagles Stop the Patriots From Getting Yet Another Ring in Super Bowl LII?

The Eagles are underdogs, but they won’t roll over. 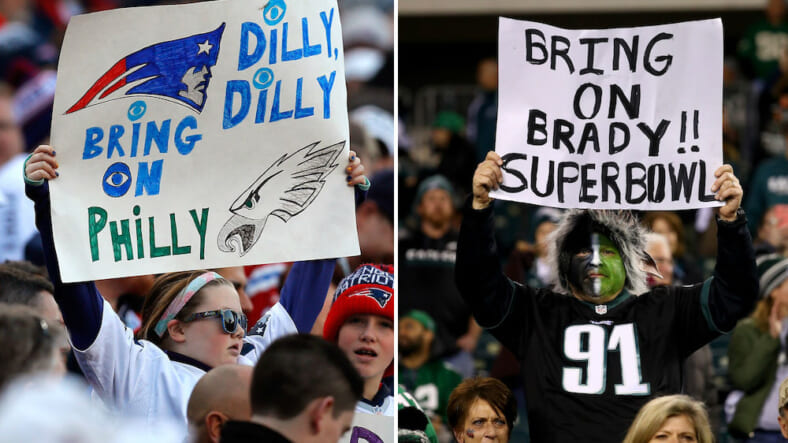 Now that the dust has settled on a wild NFL championship weekend, football fans find themselves in a familiar position: Preparing to cheer for whichever team happens to be playing the Patriots in the Super Bowl.

After a comeback win over the Jaguars in Foxboro Sunday night, Tom Brady and company are returning to the Super Bowl for the fourth time in the last seven years. And yet agin, they’ll be playing a new opponent. This time it’s the Eagles, who waxed the Vikings on Sunday and return to the Super Bowl for the first time since 2005, when the Pats, led by Brady, beat them 24-21.

Vegas is expecting the same result in 2018. The Patriots opened as early 5.5-point favorites Sunday night, making the Eagles underdogs once again. Already in the playoffs, they’ve been underdogs against the Falcons, who they beat 15-10, and the Vikings, who they beat 38-7. It’s a role the team, and its fans, have embraced.

It’s also a label that fits. The Eagles had a great regular season and rode into the playoffs as the top seed in the NFC, but they did so without Carson Wentz, their MVP candidate of a quarterback who went down with an ACL injury last month. That means they’ve been riding with Nick Foles, the one-time starter who has put up comparable numbers to Brady in two playoff games.

Foles’ reemergence in Philly is only one of the many reasons everyone outside New England is going to be wearing green on Super Bowl Sunday. The biggest reason is standing on the other sideline.

No one wants Brady, Bill Belichick and Bob Kraft to win another Super Bowl. The Patriots just won’t go away, with 2018 marking their record 10th Super Bowl trip. Most NFL fans are ready for the dynasty to end, especially those who pull for AFC teams and keep watching them fall to Touchdown Tom and his rotating band of overachievers.

The good news is this might be the year it happens. The Pats are already expected to lose both their top coordinators this off-season and if rumors of turmoil in Foxboro are true, a Super Bowl loss could be the reason to finally dissolve this dynasty.

But losing Super Bowls is not something that comes naturally to the Patriots (unless the Giants are the opponent) and this year it’ll be no different. The Pats once again had one of the top offenses in the NFL in 2017, and despite a concussion scare on Sunday, Brady’s favorite weapon, Rob Gronkowski, will likely be back for the Super Bowl.

If the Eagles do dethrone the Pats in two weeks, it will likely be because their defense figures out a way to stop Brady and Belichick. Philly’s front four is one of the best in the NFL, giving the team the ability to pressure the quarterback without blitzing. That should leave fewer openings for Brady to throw into keep the Pats from running up the score.

But we’ve seen this story enough times to know that relative strengths and weaknesses go out the window when Brady and Belichick are given two weeks to prepare for the Super Bowl. Which is to say, don’t be surprised to see an updated version of this picture in a couple weeks.