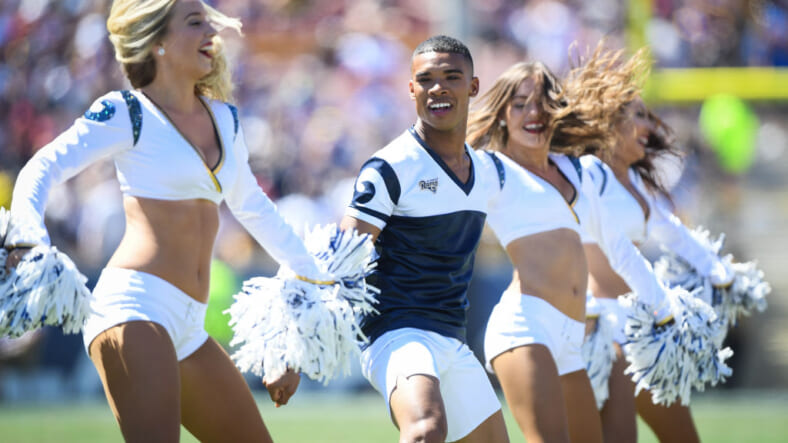 When Super Bowl LIII (53) kicks off Sunday night, there will be plenty of men on the field. Players for the LA Rams and New England Patriots, coaching staff, press, and cheerleaders.

If that’s a head-turning kicker then you probably didn’t know that the Rams have Quinton Peron and Napoleon Jinnies on their cheerleading squad. The guys made the squad in March 2018 and have occasionally been stirring controversy since.

Not that male cheerleaders ever caused much of a stir before—it’s long been a coed pursuit at the college level. Even former president George W. Bush was a head cheerleader in college.

Peron and Jinnies, however, are the first male cheerleaders called that in the history of the Big Game. Men who have participated as part of cheering efforts in the past were called stuntmen. These guys aren’t ringers coming in for one event; they are part of the squad, making any future Rams cheerleader calendars kind of confusing for the manly men frequenting your hometown mechanic’s garage.

Napoleon Jinnies spoke to CBS about making history and sounded pretty philosophical, saying “the world of entertainment is in a place of being open and if you can do the job, why not?”

His fellow cheerleader Emily Liebert admitted that “There was a bit of shock at first.”

“But then you realize it’s nothing new,” she said, “and if the talent was there, which it was, then they deserve to be on this team.”

There has been criticism directed at Peron and Jinnies being on the squad, but there’s more acceptance than anything.

In the end everyone will be focused on the game, as it should be. And if we’re being picky, the truth is, Quinton Peron and Napoleon Jinnies are not the first male cheerleaders to take the field in a Super Bowl.

In 1979, Robin Williams became the first ever male cheerleader for the Denver Broncos football team. pic.twitter.com/nHuVXcL8Ps

The late, great, incredibly hairy Robin Williams did it first in 1979.

Peron and Jinnies have some big shoes to fill.