Get ready for the big game with the best bets, odds and expert picks for the Bucs vs. the Chiefs at Super Bowl LV. 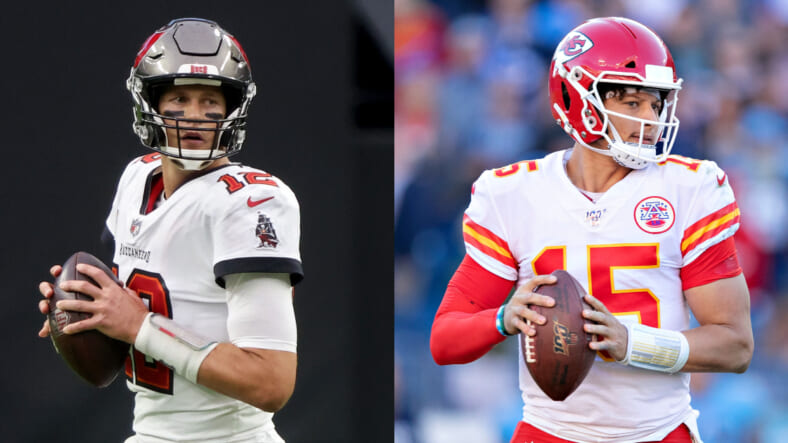 We’ve reached the end of our NFL journey, with a Super Bowl that anyone with even a passing knowledge of the game could have predicted when the season began. Patrick Mahomes and the Kansas City Chiefs will defend their Super Bowl title against the Tampa Bay Buccaneers because Tom Brady is their quarterback and if he’s not in at least every other Super Bowl, the sun snuffs out like a candle.

That’s what I’m guessing at least. Luckily, we may never have to find out.

If this is your first foray into sports betting, you’ve literally picked the biggest betting day of the year to do it with your $500 in hand. Luckily for you, BetOnline makes it easy to do and will even add an extra $1,000 to your account if you open it today.

As always, all the odds featured below are courtesy of BetOnline.AG.

We need to all understand that we are witnessing history here. Tom Brady is not only the greatest quarterback of all time, he’s greatest team sport athlete in all of modern history. He has surpassed Michael Jordan in that. What he has accomplished, here on his way to his 10th Super Bowl in his 21st season can not be understated or overhyped. It is the biggest of deals, an accomplishment that no one could ever expect to replicate.

And oh my God am I sick of it.

And you know what? I can. I find a way to do it. I reach down inside myself and make it happen. No matter the year, the team, the moment, I actively dislike and cheer against Tom Brady. And I’ve done it for at least 20 of the last 21 years. You could say I’m the Tom Brady of hating Tom Brady. When it comes to loathing Tom Brady, I am the GOAT, the Greatest of All Time.

I just turned 47, literally the day I’m writing this (Tuesday). Tom Brady is 43, if you haven’t heard. And if you’ve missed that piece of information, I assume it’s because you don’t watch the NFL, because not even a hearing impairment would save you from this tidbit of knowledge. There’s closed captioning on every football broadcast and studio show and, if you somehow missed it, I’m pretty sure Joe Buck would show up to your house with it spelled out in golden party balloons and stomp around in your front yard like a one-man band.

I have personally watched Tom Brady cost the team I root for (the Los Angeles Rams) not one, but two Super Bowl championships. My four favorite Super Bowls are XXXIV (when the Rams won) and XLII, XLVI and LII, in which the Patriots and Tom Brady lost.

Why am I telling you this? It’s because I’m a hater. Full on. I won’t deny it. I wear it with honor as if it was one of Tom Brady’s six Super Bowl rings. But here’s the thing, when it comes to betting, there’s no room for hate. I’m not going to let it cost me money.

If I do that, then Tom Brady wins twice.

And I can’t have that. The fact that he ever wins at all personally hurts me. It lessens the quality of my life.

What we need to understand as we look at our line, specifically that the Kansas City are -3 favorites over the Tampa Bay Buccaneers in Super Bowl LV, is that it’s all because of Tom Brady. Brady has shrunk this line from what it should be, Chiefs -6.5. Brady has not only willed the moribund Bucs franchise to the Super Bowl, he’s shrunk this line down to an absolute gift.

And that is because the Chiefs have covered all of two spreads since the leaves turned and one of those games was the AFC Championship. Incidentally, it was the same -3 spread we’re looking at here and the reason it wasn’t a touchdown is because no one knew when it was first posted if Patrick Mahomes would be out of the concussion protocol.

Kansas City was the best team in the league all year and proved it in the playoffs, winning without Mahomes in the fourth quarter of the AFC Divisional round and knocking off the Buffalo Bills in the AFC Championship in a game that never seemed in doubt. And, yes, I’m counting the fact that the Bills went up two scores in the first quarter. If you know anything about the Chiefs, that’s exactly the worst thing Buffalo could have done.

While Brady is the greatest QB of all time, Mahomes is unquestionably the best quarterback right now. Today. In 2021. It’s not even close. While Brady might have surpassed Michael Jordan in accomplishments, Mahomes is literally the Jordan of football. If there is a guy alive that has a shot at matching what Brady has done in his career, it’s Mahomes.

I’m not saying there’s no scenario where Brady and the Buccaneers win. We’ve all seen this play out before. We’ve seen it exactly six times. Not one of Brady’s Super Bowl wins with New England was a walk. They were all tough, close games and most won in the final seconds or in overtime.

In fact, the only cruise control Super Bowl Brady was ever involved in is the one he lost to the Philadelphia Eagles, 41-33.

Brady is gonna Brady and this one may be interesting, but it’s impossible for me to go against Patrick Mahomes and the Chiefs right now. It’s his time. The king is dead. Long live the king.

I’m not going to count the available props for the Super Bowl, because I don’t have that kind of time. Trust me. It’s a lot. But we’ve got $250 left of our bankroll so we’re going to use it. Frankly, some of these look like absolute slam dunks to me.

If you like Kansas City to win, you have to like Mahomes’ chances at nabbing the MVP. In fact, even if you don’t like the Chiefs in this one (and, if so, Gisele, all I can say is thanks for reading and my DMs are open) your best alternative to Mahomes as the MVP is probably Tom Brady at +240.

Sarah Thomas is the first female official to take the field in Super Bowl history. It’s a big deal and I don’t see Jim Nantz dropping the ball on getting this one brought up early.

Pick: $50 Sarah Thomas mentioned in the first half at -300 at BetOnline.AG

How Many Times Will Gisele Bundchen Be Shown?

Speaking of Gisele, this is a good one, because, again, it’s all about the end result of the game or the closeness of the final score. If it’s the Chiefs in a walk, they’ll probably show her once at most. If the Bucs win, you’re getting lots of her on your TV. If it’s tight and coming down to the wire either way, they’ll definitely give plenty of airtime to the Brady family booth. Just think about how many times you saw Eli Manning during Peyton’s Super Bowls. Or vice versa. It’s the same deal.

Because I feel the Chiefs will win by more than a touchdown, I’m going with the under here.

How Many Times Will “Patriots” Be Said?

This right here is a license to print money. And the vig is so good, I’m going to say put $50 on it, but if you want to up that, it wouldn’t be a bad idea. There is no way “Patriots” isn’t being mentioned multiple times Sunday.

How Many Times Will “Belichick” Be Said?

Again, this just seems like a birthday present to me and, honestly, I deserve it. You’re not getting the sweet juice of the Patriots’ prop, but we’re in the money making business here and this is as close to a lock as you will get on Super Bowl Sunday. They’ll show Brady’s Super Bowl highlights. They’ll talk about the “Brady or Belichick” question. And an over-under of one? Are you kidding?