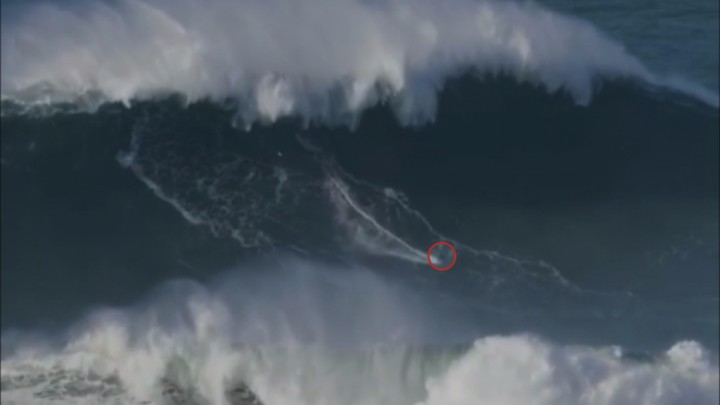 Step aside, Kelly Slater. There’s a new surfing superstar who’s taking the Internet by storm with a crazy viral video.

Big wave surfer Tom Butler (who’s English!) rode an absolutely ginormous wave that was estimated to be 100-feet tall at Nazare, Portugal on Friday in what many believe will set the new world record for biggest wave ever surfed.

“It’s the biggest wave surfed in the world this season and could beat the current big wave world record,” Butler told Cornwall Live.

The record is unlikely to be confirmed until the World Surf League Big Wave Awards in April 2019, filmmaker Pedro Miranda posted in the description of the video he shot showing Butler’s feat.

“This [record] is tricky,” Miranda said. “Tommy is a very tall guy, measuring 6-feet, 2-inches. Any wave ridden by him will always look way smaller than it really is. Not calling this a world record because I don’t like to go into speculation, but whatever measure you think it is, the wave will be way bigger after analyzed by the WSL experts.

The 29-year-old surfer teamed with German big-wave surfer Sebastian Steudtner, who towed him into the wave.

“When I was going down I thought, this is the fastest I’ve ever been,” Butler told Cornwall Live. “Time kind of slows down, it’s instinct really. I was doing everything to hold my balance. That’s when you’re training comes in. I do lots of gymnastics training to help me keep balanced.

“It’s hard to say exactly how big it was. I’d say it was 20 times my height and I’m 6-foot-2. You don’t really see it behind you because you’re so concentrated on what’s ahead of you.

“It’s like running from a raging bull. You don’t stop to think about how much it weighs. If you get eye contact then you’ve already failed.