Watch The Mountain lift 1,041 pounds, and see how his Russian rival ended up with a face full of blood. 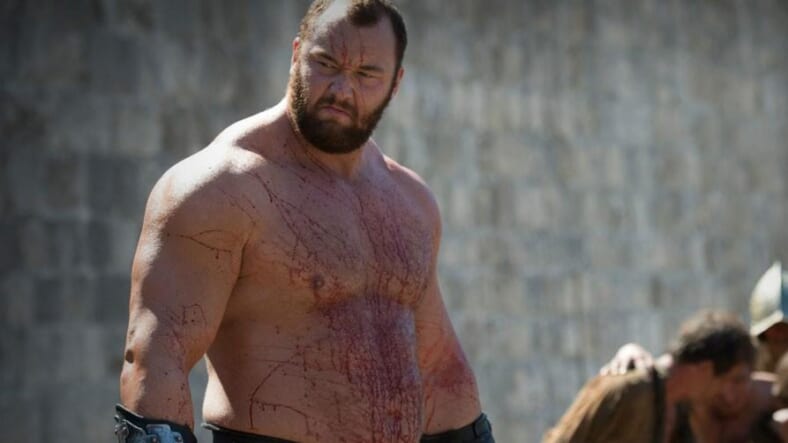 Hafþór Júlíus Björnsson, aka The Mountain from Game of Thrones, is one ridiculously strong dude in real life. He proved it yet again by taking home the title at the 2018 Arnold Strongman Classic last weekend over last year’s winner Brian Shaw and Mikhail Shivlyakov from Russia, who came in third.

But The Mountain’s most epic achievement was setting a world record by deadlifting 1,041 pounds, a feat which he basically told us he was gonna do when he casually deadlifted 1,003 pounds back in February.

Men’s Health reports that the Icelandic giant impressed in other events, too.

Björnsson started the weekend off strong, taking first in the Bag Over Bar competition with a 95-pound sandbag throw, just five pounds short of his own world record set last year.

“The Mountain is what he’s known for on HBO. But here he’s known as Hafþór Björnsson,” an announcer said as the Icelandic strongman stepped up for his victory lap axle clean and presses.

But perhaps the most badass moment of the event happened when Russian strongman Mikhail Shivlyakov’s nose exploded in blood as he attempted to lift 939 pounds.

The 37-year-old Russian — wearing a beret, literally a “hat tip” to his time in the Russian Navy — aimed to complete a deadlift of nearly half a ton.

However,  midway through the bonkers lift, Shivlyakov’s nose began to pour blood. Check it out in the video above.