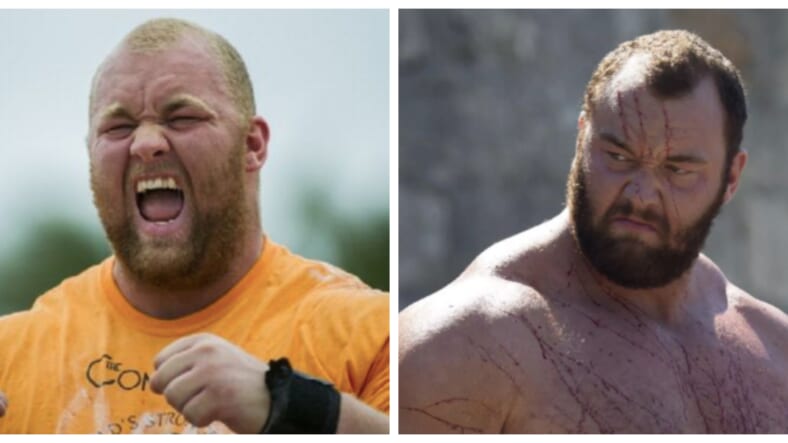 He has won multiple strongman titles—including the 2018 World’s Strongest Man competition—and he has been one of the stars of the hottest show on TV, but Hafþór Júlíus Björnsson can’t win everything.

Sadly, the Icelandic behemoth known as “The Mountain” on Game of Thrones found himself on the losing end of World’s Strongest Man 2019, his hopes of repeating dashed by Martins Licis, a competitor nicknamed “The Dragon.”

Björnsson looked like the odds-on favorite to repeat in this year’s competition after his dominating performance in the 2018 Strongman, held in the Philippines. But according to Barbend, he suffered a foot injury at the beginning that hobbled him for the rest of the event.

That opened the door for Latvia-born Martins Licis, a smaller and younger competitor based in the United States, to walk away with the whole thing.

Not to take anything away from Licis—viewers said that Björnsson didn’t appear bothered by his injury during subsequent events, so it seems the Latvian-American won fair and square. And as is often the case in the world of Strongman, he and Björnsson appear to be friendly competitors.

HERE WE HAVE IT. Our first Day in Iceland with @thorbjornsson is out! (Link in bio)! HUGE THANK YOU for picking us up from the airport, taking us out for breakfast, and helping us with groceries, my friend! Your hospitality, friendship, and willingness to help is second to none! The expression on my face is due to my lack of confidence in facing the oncoming Hot and Cold bath Thor prepared as our welcoming to Iceland. 🥵🥶😰 … @romarkweiss @lindseybowenn @sbdapparel @sbd.usa @oddhaugen @probodycoach @thetraininghall @dotfit #strongman #Sbdusa #SBDApparel #NathanPayton #Diet #Iceland #Travel #Powerlifting #Weightlifting #Eat #food #Nutrition #Greetings #BeALegend

According to news.com.au Licis goes by The Dragon due to the “fire he has inside.”

Of course, Björnsson told the New York Post before the competition that strongmen should “be willing to work 365 days a year and be absolutely obsessed” with their goals, so he knows all about fire in the belly.

As formidable as being called “Dragon” sounds, for a man just crowned the strongest in the world, Licis has an endearingly lighthearted Instagram account.

I wanted The World to see my butt while holding this crow pose. What a great way to unwind before the storm! Currently heeeeavy af (🤫 don’t tell my nutritionist, @probodycoach ) These are my LAST Days before shipping out to Florida for Worlds Strongest Man, and I felt a desire to revisit some calisthenics while watching one of my best buddies, @the.transformashawn (photo credit) … Been way too long, but glad my wrists can still handle this polar bear bod. 😎@sbdapparel @sbd.usa @dotfit @thetraininghall @oddhaugen #SBDUSA #SBDapparel #Strongman #Yoga #Calisthenics #NathanPayton

If you watch any Strongman competition it soon becomes apparent that many of these massive men are some of the nicest guys out there and extremely good sports once the fierce competition is done.

Which is probably just safer for everyone. No one wants to deal with a short-tempered goon who can also singlehandedly tow 18-wheelers.

Anyway,  Hafþór Björnsson is just 30 years old himself, meaning he likely has 10-12 more years in the game. The Mountain will be coming for The Dragon soon enough.