The XFL was was destined to fail before its first game was even over. Here’s why. 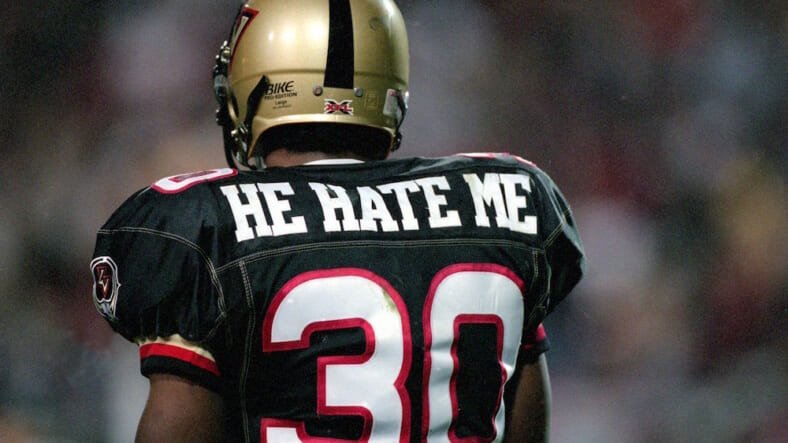 Sixteen years ago this week, the XFL’s first ever game kicked off in Los Angeles on a Saturday night. Broadcast on NBC, a part-owner of the league, the game was the culmination of months of breathless publicity and endless promotion that touted the XFL as a more exciting, sexier version of the NFL, with the WWE attitude that founder Vince McMahon brought to every one of his endevours.

After one half of football, it was clear that this experiment was going to fail. At least, that’s how Dick Ebersol remembers it. “We promised a lot. We didn’t deliver,” says Ebersol, the former head of NBC Sports and one of the XFL’s co-founders, in This Was the XFL, a 30-for-30 documentary premiering on ESPN tonight.

He’s not wrong. The football sucked, so anyone watching because they loved the sport was sure to be disappointed. And despite all the hype about a bigger, badder, more macho version of the game, it was still football, only with a bunch of players who weren’t prepared to take the field. There was no bloodshed, no WWE-style promos and way too many turnovers—six in total.

Directed by Charlie Ebersol, son of Dick, This Was the XFL is a time capsule that captures a moment that feels much further than 16 years away. This was a time when media companies threw tens of millions of dollars at ill-conceived and poorly executed ideas, when a football league could go out of its way to adopt more dangerous rules and when a major network would resort to a stunt as desperate as this one.

But little of that is probed in the documentary and when I spoke to Charlie Ebersol last month, it was easy to see why. Ebersol has nothing but fond memories of the league, which launched when he was in high school, and recalls going to six games in its only season. “The live event experience was unparalleled,” he tells Maxim. His goal with the movie was, at least in part, to fight back against the notion that the XFL was a total flop.

“For 15 years, it’s been an easy cocktail joke that this was a massive failure. When ESPN and I were having our original conversation about it, they were like, ‘This was such a massive failure,’” Ebersol says. “But the same year the XFL lost NBC $37 million, Fox and CBS lost millions more on the NFL.”

What Eberbsol’s missing is the part of the joke that isn’t about the league’s failure, but its approach to the game, which emphasized violence and sex over actual football. This is a league with an immoral approach to player safety. It eliminated the fair catch and replaced the coin flip with a “scramble” that sent player after player to the bench with an injury. It’s a league that objectified women in a way that would draw boycotts and protests today. That’s why we look back at the XFL as a farce, not becuase it didn’t last.

But the film doesn’t dig into whether the XFL was making an already dangerous game even more so. Or whether encouraging cheerleaders to bang players was in any way demeaning. A few dissenting voices are included. Most notably, Bob Costas says even before the league started he thought it would suck. But as much fun as it is to watch this disaster unfold, a little introspection would have been nice.

After talking to Ebersol though, it became clear why the film left those things out. He didn’t think they were a problem.

“The XFL came into being as a reaction to the NFL losing sight of their core brand,” he says. “The NFL still fundamentally has a massive audience that are growing increasingly agitated that the sport.”

Asked about the XFL going out of its way to endanger players, he said, “I don’t share the concern most people have and I think a correction is coming to the NFL.”

Another person who wasn’t concerned about the dangers unique to the XFL is Rod Smart, better known to those who remember the league as “He Hate Me.” Because of his bizarre nickname, which was stitched onto his jersey per XFL rules, Smart became one of the league’s brightest stars. His skills on the field didn’t hurt either.

Fresh out of college and an offseason with the Chargers, Smart tells Maxim he saw the XFL as an opportunity whose dangers were not a deterrent. “It was just football to me. When you sign up in little league, you pretty much know what you’re getting into. It’s a gladiator sport. There’s going to be a lot of banging. If you feel like that’s an issue, you shouldn’t play,” he said.

Smart seeing the XFL as “just football” provides a hint as to why the league only lasted a single season. Players, coaches and football operations people were not there for The Rock’s intros, the cheerleaders skirt’s or Jesse Ventura’s commentary, they were there for football. But the fans wanted the game of the field to match the carnival atmosphere around it.

Combine that lack of novelty with second-rate players and coaches who were just trying to get a gig in the NFL, and it didn’t matter how fun it was around the fringes, the XFL was always going to fail.