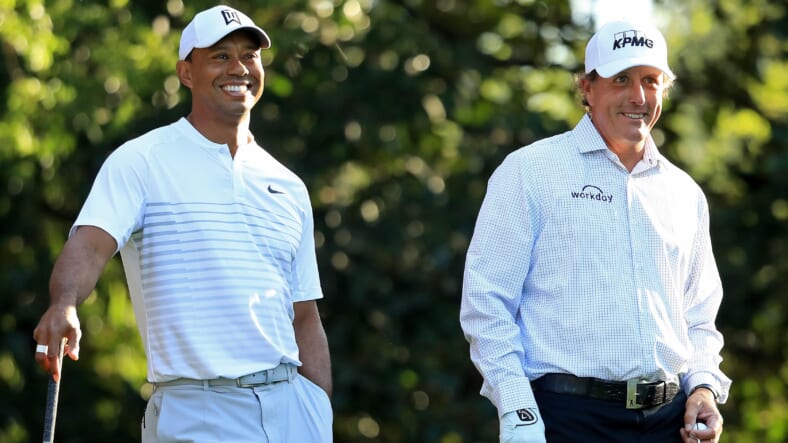 It’s about time golf took better advantage of the longtime rivalry between frenemies Tiger Woods and Phil Mickelson. In what appears to be a plot twist taken straight out of the script for a Happy Gilmore sequel, the dueling links legends have apparently agreed, in theory at least, to play for a $10 million, winner-take-all, 18-hole showdown that will be broadcast live on a major TV network.

Golf.com has all the details of the proposed megamatch:

The greatest match that never was almost took place on July 3 in Las Vegas, a prime-time TV special that was to have pitted Tiger Woods against Phil Mickelson in a $10 million winner-take-all, 18-hole death match.

The negotiations, involving a major television network and various corporate entities, couldn’t quite be consummated in time but Woods and Mickelson and their people remain committed to making it happen as soon as it’s feasible.

“We’re working on a different date,” Mickelson said on Thursday. “I thought it was done for the 3rd but obviously it wasn’t.” Woods’s representatives declined to comment.

The seeds of the plan were apparently planted back in April at the Masters, when Woods and Mickelson played a buzzed-about practice round together. Their first match could take place in Las Vegas at Shadow Creek, and, if all goes well, the two could play a few times a year, reports Golf.com.

And the good news? These two are not shy about talking smack during games, just like the aforementioned Mr. Gilmore.

This dynamic is one of the selling points to their made-for-TV match.

Both players are on board with wearing microphones, and Mickelson allows,”You will hear a lot of the comments that you don’t hear on regular TV. We both like to talk smack, and we both have fun with what we’re doing. And the fact that this isn’t an official tournament, that it’s just a head-to-head match, you’ll hear some of the little nuances, some of the little things that you don’t normally pick up.”

Given that both are sitting on fortunes in the mid- to high-nine figures, is $10 million really that big of a deal? “It’s a ridiculous amount of money,” Mickelson says. “No matter how much money you have, this amount will take both of us out of our comfort zone.”

So if Woods vs. M goes down, who you got?