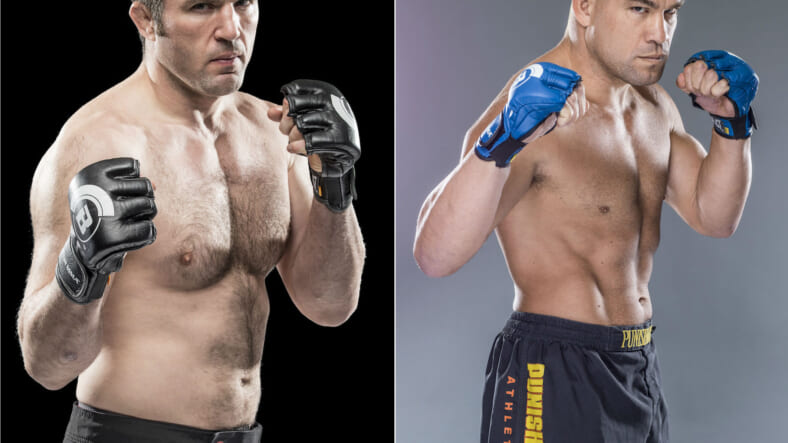 Tito Ortiz has been thinking about Chael Sonnen for 20 years.

The two light heavyweights who will headline Bellator 170: Ortiz vs. Sonnen at Los Angeles’ Forum on January 21 first met in college on the wrestling mat. Their brief run-in didn’t last long but two decades later, Ortiz is still thinking about it.

“I felt like I not only let my team down, but I let myself down,” he tells Maxim. “To get pinned in 30 seconds, I’ve never had that happen to me before.”

Even as Ortiz became one of the biggest MMA fighters in the world, the loss to Sonnen gnawed. He recalls privately pumping up Sonnen in hopes of one day getting the rematch that he so desperately wanted. “I was trying to make him a star as a big as me,” says Ortiz, one of the UFC’s earliest stars and a member of the promotion’s Hall of Fame.

It took longer than Ortiz wanted, but in just under two months, he’ll finally get his shot at redemption. But don’t expect Sonnen to be fixated on something that happened in 1997. The fast-talking fighter, who’s coming off of a three-year layoff to fight Ortiz, says he joined Bellator to fight Wanderlei Silva. “He wasn’t available and I had nothing else to do on January 21st, so I thought why not stop by the Forum and beat Tito’s ass,” Sonnen says. “The guy is a button off my shirt. He is an everyday distraction.”

Sonnen has been taking shots at Ortiz since this fight was first announced, and none have cut deeper than a quip he made about Ortiz’s car getting repossessed. “My kids get bullied because people are talking smack on me. Chael doesn’t understand how that affects my children,” Ortiz told Maxim.

Ortiz has a plan for those 15 minutes and it’s to “push the pace.”

“I’m going to take it to him. I’m going to try to finish it in the first round,” Ortiz says, citing Sonnen’s long layoff as an advantage. Sonnen, on the other hand, says he plans to dispose of Ortiz in “15 minutes or less.”

To buy tickets to Bellator 170: Ortiz vs. Sonnen, go here.