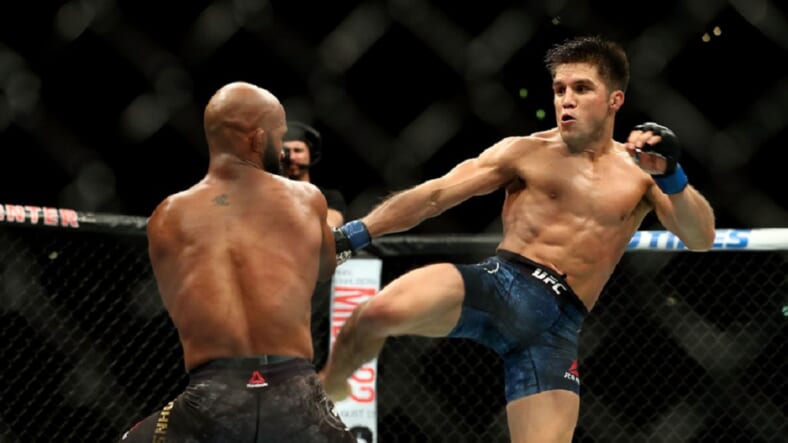 If UFC 227 had been all about the title match between T.J. Dillashaw and Cody Garbrandt, it might have been kind of a boring outing. Dillashaw, after all, handily took Garbrandt out in the first round, easily maintaining his status as bantamweight titleholder. So: not that interesting.

Then there was the bout preceding Dillashaw v. Garbrandt between Henry Cejudo and flyweight champ Demetrious Johnson. That ended with a stunning upset, Cejudo beating Johnson in a split decision.

Cejudo was a former Olympic gold medalist with a record of 13-2 going into the match. While medaling in wrestling is nothing to sneeze at, he was facing in Johnson a fighter many believe to be the overall best in all of mixed martial arts.

But Cejudo brought that proverbial A game to this bout. He put Johnson on defense for nearly the entire fight and managed five takedowns. In the end he was the winner by judges’ decision, 2-1.

In the Dillashaw-Garbrandt match there was a complicating factor: the men had been friends till about four years ago. Perhaps the enmity they had from a broken friendship fueled the winner’s powerful onslaught, but all he said later was the victory cemented his “legacy as the greatest bantamweight of all time.”

For his part, Cejudo wasted no time in calling out the winner of the bantamweight match, saying he was ready to level up and take on Dillashaw.

"I felt disrespected, now give me the best at 135 pounds!"

"They don't have to come down, I'm going up! I want that belt too!"

Time for Cejudo to start bulking in preparation.