“If you’re not playing for the Super Bowl, then there’s no reason to play.” 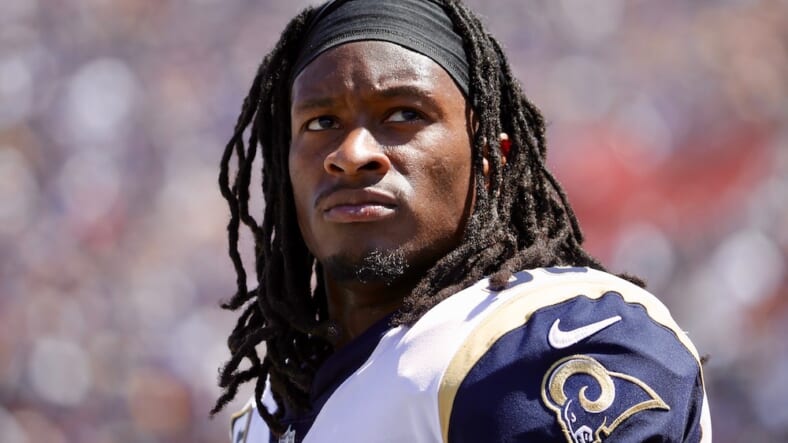 Now entering his fourth season, Los Angeles Rams running back Todd Gurley, who just reset the market for running backs with a four-year, $60 million contract, is all business.

You might not guess it if you met him in person, as the 24-year-old All-Pro is as approachable in his regular life as he is terrifying on the field.

But after a busy offseason by the team’s front office, Gurley is now surrounded by a plethora of stars on the Rams, particularly with the addition of WR Brandin Cooks and DT Ndamukong Suh to an already stacked roster. So while he might not seem it, Gurley is indeed all business, and that business is winning Super Bowls.

A prime example of the new generation of top NFL running backs, Gurley can do it all. He’ll bounce a run outside with his freakish speed only to overwhelm the cornerbacks he encounters with his 224-pound frame and low center of gravity.

Force him between the tackles, and he’ll patiently wait for his hole to open before exploding through the gap on his way to the second tier and any linebackers brave enough to challenge him in a collision.

And if a defense loses track of him on passing downs, he can take a screen pass the distance. “I’m definitely a downhill runner,” admits Gurley. “More of a one-cut back. I like to use my speed as much as possible, and to catch out of the backfield.”

While Gurley’s a three-down running back, he only needs one down, one mistake, one hesitation by a defender to take over a game. And there’s only one game on his mind leading into this season: Super Bowl LIII.

“There’s always disappointment if you don’t get to the championship,” claims the former University of Georgia star, who racked up more than 2,000 yards from scrimmage and 19 touchdowns last season.

“That’s what every team’s attitude is. If they’re not playing for the Super Bowl, then there’s no reason to play.” Given the way the Rams have improved and added to their roster in recent seasons, Gurley acknowledges, “We all know what we’re capable of. We just got to go out there and show that we can do it.”

Even without a title, Gurley isn’t suffering. After the franchise moved from St. Louis to Los Angeles, Gurley, who had grown up in a small North Carolina town before moving to Athens, Georgia, for college, was ready for what the big city offered.

“I love L.A.; it’s the coolest city,” he says. “I love being here.” And the bright lights of Hollywood haven’t kept Gurley from staying grounded. Since signing his rookie contract, Gurley hasn’t spoiled himself, much. “For most of us, once we get that paycheck, it’s just getting Mom a place.”

The young back is confident but keeps things firmly in perspective. Gurley’s not much for caring about what others think— even the fans who support him on Sundays. “Until I do your job and you do my job, it’s easy to say something if you’re not in my shoes. Some fans have got that heart; you can’t blame them. We love it, but at the end of the day it’s definitely just a game.”

Football might just be a game, but there’s one specific game on Gurley’s mind, and he won’t stop thinking about it until he wins it.