The legendary QB is headed to a $30 million per season deal with the Bucs. 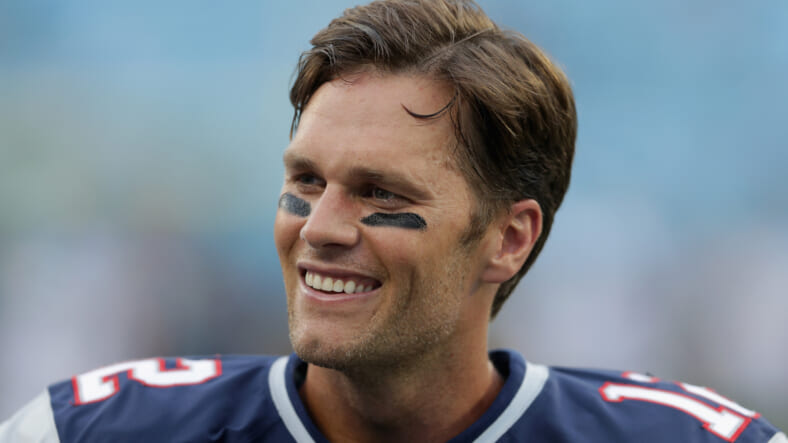 On St. Patrick’s Day, with all the bars in Boston closed due to the Coronavirus Pandemic, Tom Brady made it official: He is leaving the New England Patriots.

Brady posted his goodbye to the Pats on social media. The screengrabbed paragraphs comprised one statement. Here it is in full:

To all my teammates, coaches, executives and staff, Coach Belichick, RKK and the Kraft family and the entire organization. I want to say thank you for the past twenty years of my life and the daily commitment to winning and creating a winning culture built on great values. I am grateful for all that you have taught me – I have learned from everyone. You have allowed me to maximize my potential and that is all a player can ever hope for. Everything we have accomplished brings me great joy and the lessons I have learned will carry one with me forever. I have benefited from all you have given me. I cherished every opportunity I had to be a part of our team, and I love you all for that. Our team has always set a great standard in pro sports and I know it will continue to do just that.”Although my football journey will take place elsewhere, I appreciate everything that we have achieved and am grateful for our incredible TEAM accomplishments. I have been privileged to have had the opportunity to know each and everyone of you, and to have the memories we’ve created together.” I wanted to say thank you to all of the incredible fans and Patriots supporters. MA has been my home for twenty years. It has truly been the happiest two decades I could have envisioned in my life and I have nothing but love and gratitude for my time in New England. The support has been overwhelming – I wish every player could experience it. My children were born and raised here and you always embraced this California kid as your own. I love your commitment and loyalty to your teams and winning for our city means more than you will ever know. I can’t thank you enough for the support of our team. The packed training camps and sold out stadiums and mostly the victory parades. I have been blessed to share them with you all.I tried to represent us always in the best and most honorable way, and I fought hard with my teammates to help bring victory and triumph even in the most dire situations. You opened your heart to me, and I opened my heart to you. And Pats Nation will always be a part of me. I don’t know what my football future holds but it is time for me to open a new stage for my life and career. I thank you from the bottom of my heart and I will always love you and what we have shared – a lifetime full of fun memories.

Brady has reportedly signed a deal with the Tampa Bay Buccaneers.

On Tuesday night, ESPN’s Adam Schefter reported that Tampa Bay is the “expected landing spot for Tom Brady barring anything unforeseen” and NFL Network’s Ian Rapoport reported that the Buccaneers had agreed in principle with Brady. The deal will be worth about $30 million per season, according to Rapoport.

Considering the United States is in the midst of an unprecedented public health crisis, Brady’s statement still had a remarkable impact.

Some treated it as if it were a retirement announcement and elected to remind fans of the QB’s undeniable greatness, though Brady’s careful wording implied he wasn’t done with football, just New England.


Greatest to ever do it.

And ESPN’s Adam Schefter noted we don’t really know what Brady is up to next.

Despite today’s proclamation that he would not be returning to New England, Tom Brady has not made a decision on where he will play next season and he will be exploring his options, per a league source.

For months, Tom Brady has been plotting his departure from New England. But to announce it on St. Patrick’s Day when every bar in Boston is closed? Ice cold.

I've been watching Tom Brady play quarterback for the Patriots since I was six years old. I don't feel I'm being dramatic when I say seeing him every fall as been one of the biggest constants throughout my life.

This hurts. It really does.

The fact that Tom Brady says he’s leaving New England… on St. Patrick’s Day when quite literally zero bars are open for people to drown themselves in… is Coronavirus’ wildest chess move yet.

Red Sox traded Mookie Betts, Tom Brady is leaving the Patriots, the NHL season may get canceled with the Bruins in first place. Boston sports fans can truly never catch a break it's insane

Patriots haters waking up to see the news that Tom Brady is leaving https://t.co/0tjQVIfuA1

I love that Tom Brady did this to Boston on St. Patrick's Day when their fans can't go to a bar. #Patriots

Tom Brady adding to the shitshow that is 2020. pic.twitter.com/q0YpoxgcVX

No one at the moment knows what is next for Tom Brady. The Tennessee Titans once seemed like a possibility, but they just re-upped quarterback Ryan Tannehill. The San Francisco 49ers have been mentioned in the past, but they have reportedly “decided not to pursue” a contract with him.

Whatever happens, Brady’s probably smart enough to wait until Boston has simmered down a bit before making a new announcement.