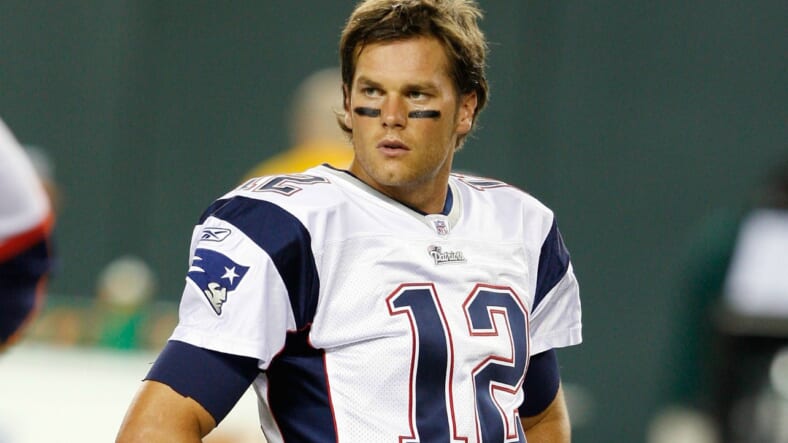 When you’re one of the greatest athletes of all time, as Tom Brady is, obviously you need to be mindful of what you eat. Fueling your massive, muscular body with handfuls of Cheetos and mountains of ice cream isn’t going to do you any favors. Green leafy veggies, protein, and healthy fats, however, will give you the energy you need.

But apparently, Tommy over here likes to take healthy eating to a new extreme — an extreme I didn’t even know was possible — which he explains in full detail in his new self-help book, The TB12 Method: How to Achieve a Lifetime of Sustained Peak Performance.

The Boston Globe outlines some of his main dietary points:

On an average day, Brady says he wakes up around 6 a.m. and “immediately” drinks 20 ounces of water with electrolytes. As he discusses at-length in the book, Brady stresses the importance of staying hydrated and says he drinks 12 to 25 glasses of water a day, always with his TB12 electrolyte concentrate added.

“I add electrolytes to virtually everything I drink,” Brady writes, including lemonade.After his obligatory 20-ounce glass of water, Brady showers and goes downstairs to make some sort of smoothie.

“Typically, it contains blueberries, bananas, seeds, and nuts,” he says. “It’s nutrient dense, high in fat, high in protein, and high in calories.”

Once full of fruit and seeds, Brady says he works out roughly around 8 a.m., which is another thing about which he speaks at length — both in the book, as well as with any reporter who will listen (the key term to know is pliability; just ask Jon Gruden).

“Wait any longer and your body will begin seeking its own protein sources and start tearing down muscle you’ve just been building up,” he writes. Brady says he is committed to the “20-minute rule” and “rarely” does any intense workouts without a protein shake immediately after.

Please keep in mind, it’s only 10 in the morning, and he’s already chugged 20 ounces of water, electrolytes, a smoothie, more water, some more electrolytes, and a protein shake.

After his smoothie, he has a snack, because his stomach is a bottomless pit. “I never go long without snacking,” he says.

Brady follows four general principles about combining food. The first is not to eat proteins with carbohydrates like potatoes or bread. The second is that mixing proteins or carbs with vegetables is “ideal” for digestion. Except for nightshades, of course.

“I make sure most of what I eat is alkalizing,” Brady writes.

In addition to his strict regime of mostly plant-based foods, Brady follows a so-called alkaline diet, which purports to minimize muscle inflammation. Long story short, he generally tries to limit “acidifying” foods — such as white rice and bread, but also cold cuts, pineapples, and yogurt, to name a few — to 20 percent of his diet. The other 80 percent he says should be made up of alkalizing foods, like Brussels sprouts, sweet potatoes, and dandelion greens.

To summarize the above excerpt, Tom Brady eats a limited selection of alkaline foods, similar to the diet of a grazing farm animal, but with more protein. I mean, have you ever had dandelion greens? That shit is bitter, and is something only the distinct taste buds of a rabbit would find tasty. In all fairness, though, it’s really healthy.

After lunch, he has some more snacks, including a protein shake, a protein bar, and fruit. But he emphasizes that you should never, ever eat fruits with other foods, because it’s bad for digestion. Um…okay. If I were an athlete, I’d follow this piece of advice and never smother apples with Nutella again. But seeing as I don’t care, I’m going to keep eating it.

Around 6 p.m., Brady sits down at the dinner table with his hot supermodel wife Gisele, and has a “nutrient-dense meal that includes a lot of vegetables.” Mmm. Sounds…healthy.

“I don’t really drink tea, but I might drink a cup of bone broth,” he says, and adds that for dessert, he has a heaping plate of…nothing. No dessert in the Brady household!

“I enjoy how I eat, and what I eat, and never feel like I’m missing out,” he writes, while probably wiping away a tear.

If you say so! But then again, he’s sacrificing delicious foods for a massive paycheck, so I guess it balances out.