This is just too perfect. 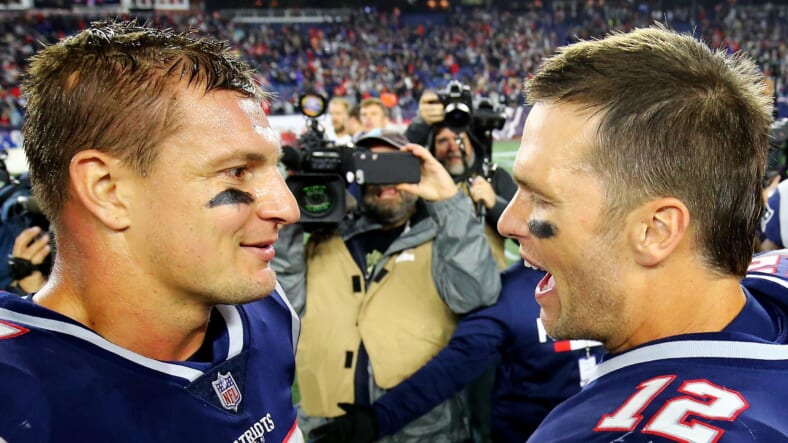 Diehard haters of the New England Patriots will likely root even harder for the Los Angeles Rams to beat them at the Super Bowl after watching this video shared on Tom Brady’s Instagram account Sunday night.

After the Patriots’ dramatic 37-31 overtime victory over the Kansas City Chiefs to clinch the AFC championship, Brady celebrated his third straight trip to the Super Bowl (and his ninth overall with the Patriots) with a victory lap video co-starring tight end Rob Gronkowski.

As P. Diddy’s “Bad Boys for Life” plays in the background, the dynamic duo are seen grinning and shrugging without saying a word. The video, captioned with the letter “W” (you know, for win) cuts to a clip of Gronk scoring a touchdown, some celebratory scenes, and the line: “Still here.”

Brady was definitely pumped after the win, and even dropped the F-Bomb on live TV during an interview afterwards.  Asked how it felt, he replied, “un-fucking believable, bro,” adding, “This is crazy.”

What it feels like to be back in the Superbowl yet again?

This isn’t the first time Brady shared a hype video set to an old school hip-hop soundtrack. A week ago, Brady celebrated the Patriots’ win over the Chargers with a video in which he gave an update to fans while walking on a treadmill.

The clip featured a snippet from 50 Cent’s “Many Men,” causing the rapper himself to give Touchdown Tom a shout-out and predict another Super Bowl victory on Twitter: “Oh, shit he gonna do it again.”

Oh shit he gonna do it again, 🤦‍♂️he listening to (many men ) getting his mind right. #TomBrady let’s go ! #lecheminduroi pic.twitter.com/VndjZhLInA

We wouldn’t be surprised.