Tom Brady Vs. Joe Montana: Who Ya Got?

Touchdown Tom vs. Joe Cool: Who is the NFL GOAT? 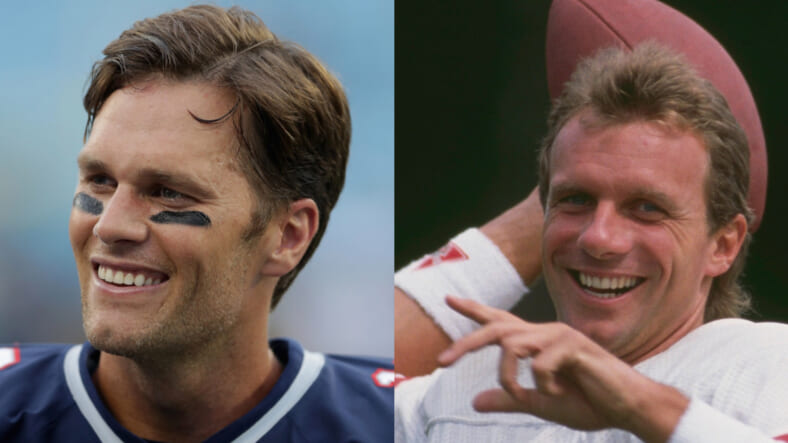 Tom Brady may be widely considered the GOAT of NFL quarterbacks, but now that he’s in the final stages of his career (and on the heels of a lackluster debut with Bucs) there may be some chinks in the armor of the former Patriots legend’s golden reputation.

Throughout NFL history, fans have fiercely debated who they would rather have on the field to captain a game-winning drive: Is it Brady? Drew Brees? Brett Favre? While Brady has often proved himself to be that go-to gunslinger–he has, after all, won six Super Bowls and competed in nine–some old-school football fans favor 49ers and Chiefs QB Joe Montana, who won all four Super Bowls in which he appeared.

While Brady may have won the overall GOAT conversation, many NFL aficionados still pick Montana in a clutch situation, as evidenced from this Good Morning Football video debate last year:

Final drive, game on the line, are you taking @TomBrady or @JoeMontana? pic.twitter.com/jvnl0xUseD

While GMFL‘s Kyle Brandt picks Montana over Brady, 247 Sports gave Brady the edge when weighing in on the eternal debate, writing: “Montana may have defeated opponents with arm strength and big plays downfield, but Brady is a master at getting his teammates in position and tricking the defense.”

But who would you rather have on your team, Brady or Montana?

Go to versusgame.com to play on your phone and predict the winner of this challenge and other fun face-offs!