Photo Reveals Tom Brady’s NFL MVP Speech Is Already Written, Even Though Award Not Given Out Till Saturday

Meanwhile, the Eagles have a plan to make sure he doesn’t win anything else this weekend. 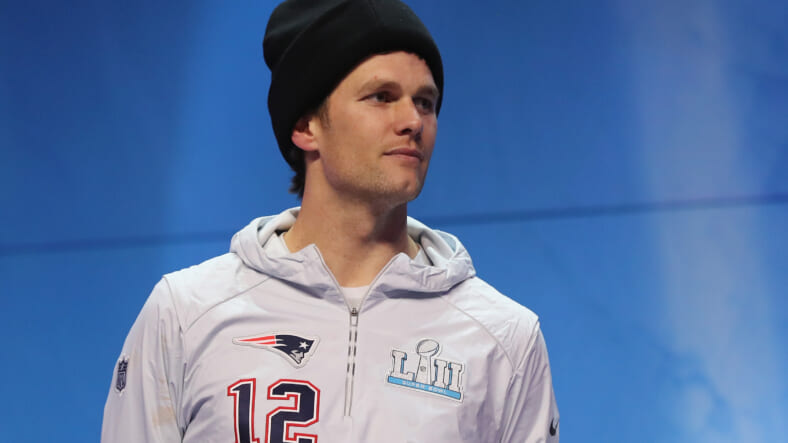 The NFL won’t hand out the MVP award until Saturday, but kid-kisser Tom Brady appears to think he’s already got it in the bag.

On Thursday a reporter in Minneapolis took a photo of some dude carrying what appeared to be Brady’s pre-drafted acceptance speech. Some of the document is covered by the arm of the man who will no doubt be fired today, but some of it can still be read.

“…and honored to be recognized as this year’s recipient of (the Associated) Press MVP Award,” the paper says.

NFL MVP will be awarded this weekend, but someone was carrying Tom Brady's acceptance speech in plain view of media during Pats presser today…. pic.twitter.com/Oxo2DUKSyJ

There’s nothing wrong with prepping a speech in advance, especially given the likelihood that Brady takes home the award this weekend.

The 40-year-old had yet another monster year, throwing for 4,577 yards and 32 TDs on his way to yet another Super Bowl. Still, it would have been a good idea to keep that speech on Google Drive until the award became official.

Even if Brady is right and he takes home the MVP tomorrow, the Eagles are hoping to prevent him from winning another trophy Sunday. Coach Doug Pederson’s plan? Aggression.

“He’s made it known he’s going to be aggressive and he’s going to play to win the game, not to lose,” Eagles center Jason Kelce told Yahoo.

Pederson has been quick to embrace the analytical side of football and the often unorthodox ways in which statistics say a game should be called. For example, The Eagles led the NFL in successful fourth down plays this season, because unlike most NFL coaches, Pederson doens’t reflexing call for the kicker after an unsuccessful third down.

That same mantra of aggression will carry over to the defensive side, where the Eagles were the best team this season at pressuring the quarterback. What makes the pressure so effective is that it often comes without blitzing, meaning receivers are well covered. That translates to a team what was top five in the league in interceptions this year.

Tom Brady, of course, doesn’t throw many interceptions. On Sunday, something’s got to give.