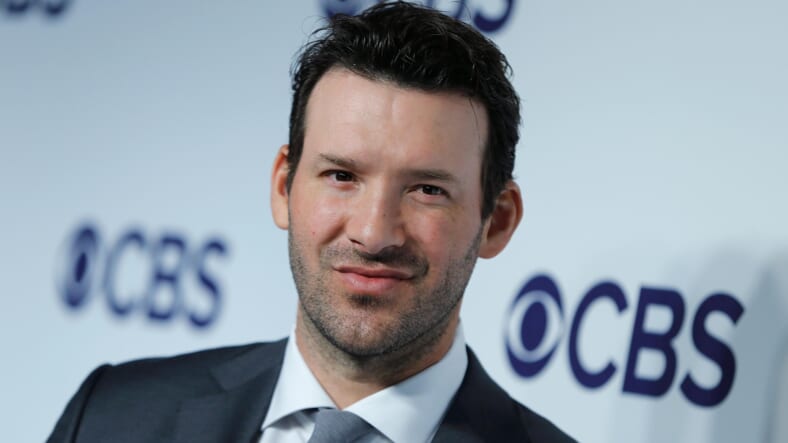 It must have surprised the instructors at wizarding school when Tony Romo hung up his wand and robe to play football. Because as a commentator on Sunday’s Patriots-Chiefs matchup he proved one thing for sure: he’s a supernaturally gifted gameplay predictor.

Sure, Romo was a star Cowboys QB, considered among the best, but his ability to anticipate Tom Brady‘s moves was still uncanny. If it wasn’t magic, maybe it was more like the profiler who can predict a serial killer’s actions by living inside his head.

Brady probably wouldn’t appreciate that comparison, but it works.

Social media soon lit up on Sunday as Romo launched into what may have been one of the most flawless sports commentating performances in NFL history. One example singled out by many online and in the media came near the end of the 4th quarter.

It was fourth and 1 and the Chiefs were still in the lead, 21-17. Romo spotted Tom Brady calling an audible play and indicated the Pats would pull a stretch run down the right side of the field. They did.

Then there’s this, in which it seems like Romo basically tells Brady to give it to Edelman, and he does.

“Throw to Edelman over the middle of the field.”

Romo’s intelligence and acumen may have been underscored by some of his peers’, uh, deficits. This guy certainly thought so.

Tony Romo – Calls plays before they happen. Points things out after plays before they can even cue up a replay.
Troy Aikman – Gets most of the players' names right. Sometimes knows what down it is.
Cris Collinsworth – Creepy uncle.

One sports journalist realized that there might be a downside to Romo’s ability to see so many steps ahead.

If @tonyromo ever tells you tomorrow is your last day on Earth, you best get your affairs in order.

By Monday morning the Patriots had beaten the Chiefs 37-31 and were on their way to Super Bowl 53. Romo’s legendary performance, however, was still on the minds of many who could see alternate uses for his seemingly psychic abilities.

"Tony, when will the government shutdown end?"#YoureAWizardTony

Romo, I'm looking at a couple different investments can we chat about the future of these companies. #YoureAWizardTony

Romo isn’t always right. His early Super Bowl picks made in mid-2018 were way off.

All Romo really brings to bear on his analysis is a lifetime of game knowledge and experience and apparently a brain that was never too badly shaken to function well when he was playing for the Cowboys.

That said, he also once did some masterful color commentary about a cat on the field. Until he can conclusively prove the cat didn’t ride in on a broom with one of his wizarding friends, we’re going to remain a little spooked by Romo’s abilities.