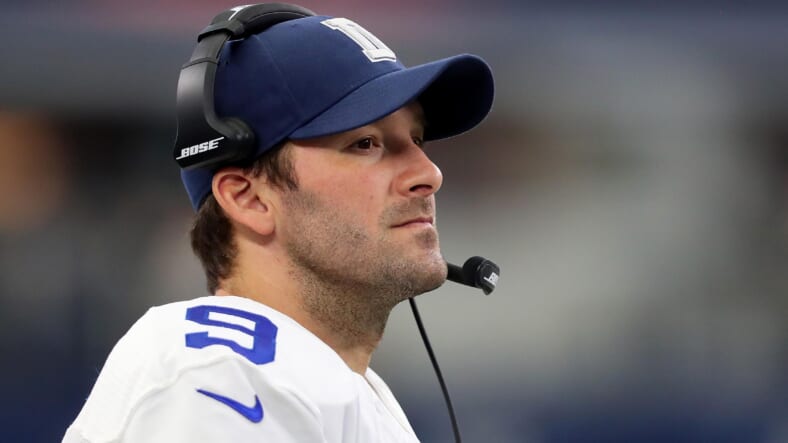 Tony Romo is such a football wizard pro teams are reportedly trying to get him back on the gridiron.

As the New England Patriots and Kansas City Chiefs battled for the AFC title on Sunday, CBS’ lead NFL analyst once again showed his uncanny—some might say supernatural—ability to consistently predict plays.

Just listen to “Romo-stradamus” call the Pats’ runs, routes and intended receivers before the snap:

The Dallas Cowboys’ former franchise quarterback suited up for his last game in 2016. But in an interview with Richard Deitsch of The Athletic, Romo hinted that he’s received offers to come out of retirement and play again.

“You are 38 years old, younger than some of the quarterbacks playing in the National Football League. When was the last time someone contacted you with a legitimate offer to play?” Deitsch asked, per Total Pro Sports.

“There are legitimate contract offers and there are, ‘Hey, what are you thinking?'” Romo replied.

Deitsch has a point regarding age. Romo is, after all, younger than two top active QBs—41-year-old Pats superstar Tom Brady and 40-year-old Drew Brees of the New Orleans Saints.

But he was also notoriously prone to injury during his time with Dallas. For instance, he missed the first 10 games of his last season with a compression fracture to his L1 vertebra.

He’ll be 39 by the start of the 2019 preseason, making the notion of a comeback sound optimistic at best.

As for his current gig, Romo added that years of playing and studying at football’s highest level are behind his success in the booth.

“I don’t pretend to have all the answers. I do think in some ways I have studied the game for 20 years and, at my core, I have tried to improve and get better at football.”

“I think that has really helped me do this job, where I just know a lot of stuff that I have thought about over the years. It gives you a history…”

CBS apparently agrees. The network is reportedly prepared to increase his current $4 million annual salary to keep him on the payroll.

One thing’s for sure: Romo’s commentary on the Pats and Los Angeles Rams’ matchup in Super Bowl LIII is going to blow fans’ minds.