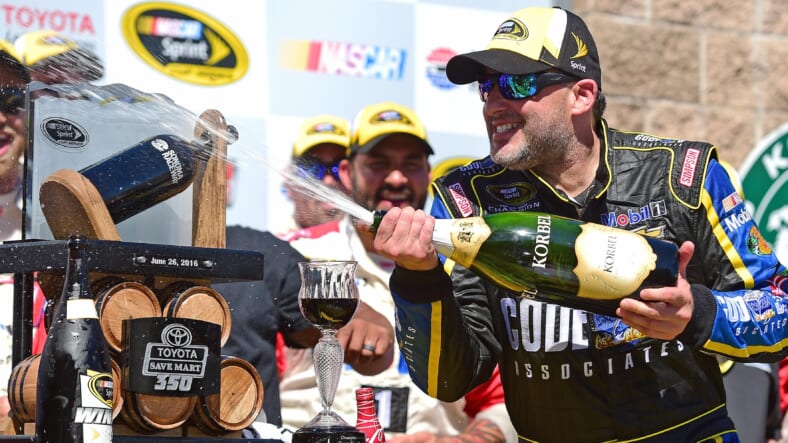 Tony “Smoke” Stewart took matters into his own hands when a belligerent heckler harassed him at a Minnesota racetrack last weekend.

While the above clip shows Stewart running around a pickup and punching a guy in a green shirt—you can even hear an audible “thud” when he connects—it’s hard to hear what was said.

That’s when Woehl says Tony responded, firing back, “I blew my engine, you f*cking asshole. Do you want to pay for it?”
The two traded a few more barbs … with Stewart deciding to unleash a single-barrel salute to the heckler with his left hand.
In the video, you can hear the heckler’s response, because he screams back at Stewart, “Hey, Tony, I got two of them” while flipping him off with BOTH hands.Stewart immediately lost his cool and went after the guy.

Woehl claims Tony said after the punch, “F*ck, I broke my hand.”

Apparently the guy was mad that Stewart’s car quit on the first lap. The fact that the event was reportedly promoted as “Tony Stewart Night” probably didn’t help matters.

Track officials handled the aftermath internally. No reports were filed, and no police were involved.

Stewart, who retired from the motorsport following his 2016 season, is set to be inducted into the NASCAR hall of fame in 2020. Hopefully his hand is healed up by then.