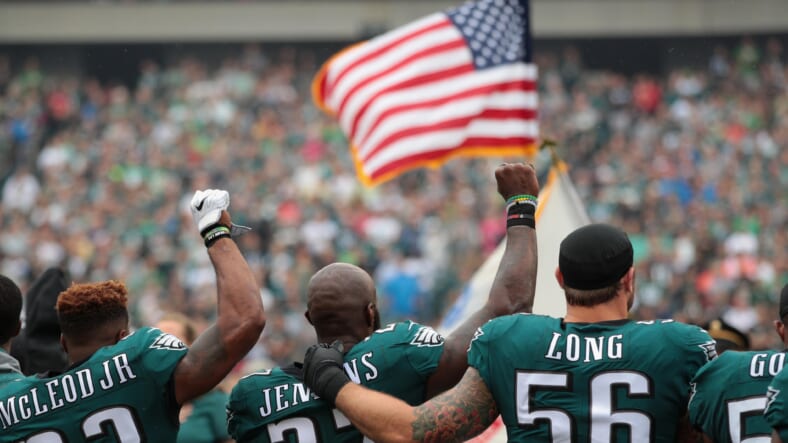 The Philadelphia Eagles will not be celebrating their Super Bowl victory at the White House after President Trump abruptly rescinded their invitation Monday.

The White House announced the cancellation in a statement, released less than 24 hours before the ceremony was set to begin. The statement said the Eagles disagree “with their President because he insists that they proudly stand for the National Anthem, hand on heart, in honor of the great men and women of our military and the people of our country.”

The Eagles were planning to send a smaller-than-usual delegation of players to the White House after some declared their intention to skip the event. According to one report, fewer than 10 players were planning to attend. ESPN’s Adam Schefter reported that “most — if not all — of the black players” were going to stay home.

“The Philadelphia Eagles Football Team was invited to the White House,” Trump wrote in a tweet Monday night. “Unfortunately, only a small number of players decided to come, and we canceled the event. Staying in the Locker Room for the playing of our National Anthem is as disrespectful to our country as kneeling. Sorry!”

The second part of Trump’s tweet takes issue with the NFL’s new policy that allows players to stay in the locker room during the national anthem but mandates that they stand if they’re on the field for the song.

It’s worth noting that not a single Eagles player knelt during the anthem this year. Several did raise a fist during the song and some of those players had publicly said they wouldn’t be attending a White House celebration.

“I don’t want to take away from anybody’s experience or make it a big distraction. It’s a celebratory event, and I want the guys who choose to go or whatever to enjoy that,” safety Malcolm Jenkins said in February. “Me personally, because it’s not a meeting or a sit-down or anything like that, I’m just not interested in the photo op.

Defensive end Chris Long had also said he wouldn’t be going to the White House. On Twitter Tuesday morning, he ripped Fox News for showing pictures of praying players during a segment that implied those players were kneeling during the anthem.

The NFL Player’s Association said in a statement that it is disappointed in Trump’s decision.

Even LeBron James weighed in during a press conference ahead of Game 3 of the NBA Finals.

A reporter asked James about his response to Trump disinviting the Super Bowl champions from attending the customary White House ceremony, after many players said they would not attend.

“I actually just found out about it,” James said. “It’s typical of him. I am not surprised.”

“I mean, I know no matter who wins this series no one wants the invite anyways. It won’t be Golden State or Cleveland going,” James said.

There are some though who liked Trump’s move, despite it being based on an intentional misreading of kneeling during the national anthem.

I’m proud to call myself an @astros fan…From a city and support a team that has respect for our great country and took an invite from @realDonaldTrump to visit the White House last year….Glad that Trump told the Eagles org to kick rocks…

To bad the eagles can't respect our president. glad he cancelled the event. Go Trump.

Glad to hear President Trump pull his invitation to his home at the White House to those overpaid NFL punks the Philadelphia Eagles . You don’t want to stand for the anthem don’t come to my house. Finally a patriotic President with balls.