Watch Fury’s 11th-round KO of Wilder in a trilogy bout that’s being called one of the greatest heavyweight championship fights ever. 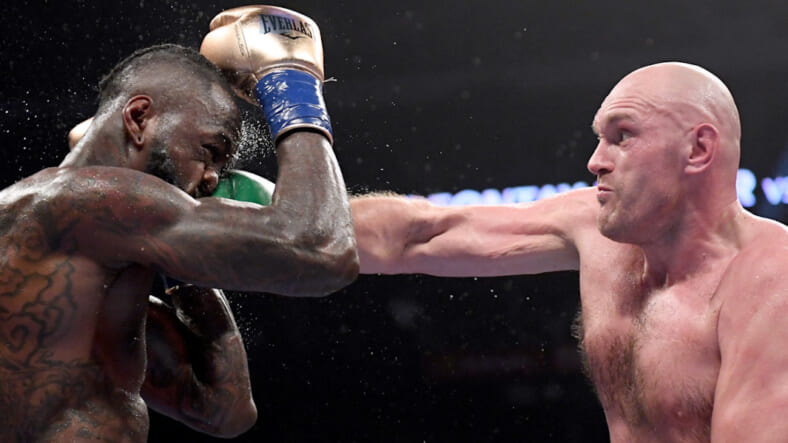 Heavyweight boxing champion Tyson Fury thrillingly won his third fight with Deontay Wilder Saturday night in Las Vegas, rallying back from multiple knockdowns to stop Wilder by 11th-round knockout in one of the greatest heavyweight title clashes in years.

“I’ve been in this business 57 years promoting fights and I truly have to say I have never seen a heavyweight fight as magnificent as this,” promoter Bob Arum told the assembled media post-fight.

The first Fury-Wilder fight, in late 2018, ended in a controversial draw after Fury controlled the majority of the match but suffered two brutal knockdowns at the hands of his ferocious foe. Their second fight, in February of 2020, was all Fury, who walloped Wilder to a seventh-round corner stoppage.

After his previous success against Wilder, Fury entered their Saturday night trilogy as a substantial betting favorite. Those expecting a blowout for the towering Brit, however, were disappointed.

Wilder started strong, implementing a jab-heavy attack to Fury’s midsection to win round one on most scorecards. Fury began to force a momentum swing in round two, and ultimately dropped Wilder in the third for a 10-8 round. Wilder then surged back in the fourth, flaunting all of his vaunted power by knocking Fury down twice before the round had concluded.

Unfortunately for Wilder fans, that’s more or less where his success ended. While he landed a few more good punches before all was said and done, Fury gradually took complete control of the fight, battering his American adversary into a state of exhausted bewilderment.

By the time the 11th round began, Wilder’s legs were shot. His arms hung low, offering no more defense than a pair of pool noodles. The end came at the 1:10 mark of the round. Fury unleashed a procession of rocket-fuelled uppercuts and hooks, the last of which sent Wilder crashing to the mat in a ruined heap.

“Shots like that end careers,” Fury told reporters after the action had subsided. “I just hope that [Wilder’s] OK. Because he took a lot of punishment tonight.”

“Don’t ever doubt me,” he added. “When the chips are down, I will always deliver. I give [God] the glory for the victory. [Wilder’s] a tough man — he took some big shots tonight. It was a great fight tonight as well as any trilogy in history.”

From here, it’s not clear what the future holds for Fury—but the options are plentiful. Many fans and pundits are already calling for a fight between the WBC, Ring Magazine and lineal heavyweight champion and Oleksandr Usyk, who recently captured the WBA, IBF, WBO and IBO heavyweight titles with an upset decision defeat of Anthony Joshua.

However, Joshua and his team exercised their rematch clause on Saturday, meaning Usyk could be tied up with that obligation for the time being.

If Usyk and Joshua do run it back, Fury will most likely be offered a fight with Dillian Whyte, provided Whyte gets by Otto Wallin on October 30.

The future is murkier for Wilder. After being shuttled to hospital post-fight, his first priority will be healing up. Once he’s fighting fit, he can look forward to potential clashes with the Usyk-Joshua rematch loser, Whyte, Ruiz, or another established heavyweight. The real struggle, however, will likely be accepting that, contrary to inviolable self-belief, as he is not the best in the world.

That title belongs to Fury and nobody else. At this stage its undeniable.