Plus: The latest odds on who is favored to win on Saturday night. 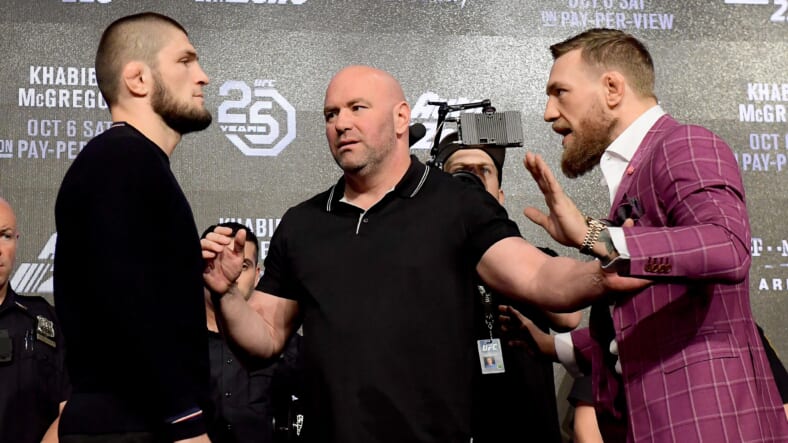 UFC 229 will be the most lucrative MMA pay-per-view fight ever–at least according to Dana White.

The UFC president predicts that more than three million people will buy Saturday’s lightweight championship megafight between Conor McGregor and Khabib Nurmagomedov, based on internal metrics and engagement trends on social media.

The build-up to McGregor’s return to the UFC Octagon has been marked by a raging beef between the two fighters, especially after McGregor hurled a dolly at Khabib’s bus back in April. And all that drama is set to fuel seriously historic pay-per-view sales.

“Conor has such a massive fan base that it’s hard to move the number that much, so the increase we’ve seen from him is incredible,” White bragged to Yahoo Sports.

“Khabib, man, his audience is eating it all up. … He’s Muslim and he’s Russian and he’s hitting two huge audiences we haven’t really gotten a lot previously. He’s hit the big-time now and his fans are totally into it.”

McGregor claims he could personally rake in $50 million, which, if remotely true, would be the biggest UFC payday ever…by far.

“We are estimating between three and three and a half million,” McGregor said during Thursday’s UFC 229 pre-fight press conference. “I say I will close in around the $50 million dollar mark.”

In addition to shattering financial records, UFC 229 could be nipping at the heels of the reigning pay-per-view boxing matches: 2015’s Floyd Mayweather vs. Manny Pacquiao and 2017’s considerably more entertaining Mayweather vs. McGregor.

Because the UFC isn’t jacking up their standard $64.99 PPV price, there’s a chance that it could even hit 4 million buys. But even though more UFC fans will be watching than ever before, the event’s $17 million gate will be less than that of UFC 205, which hit $17.7 million.

“There are going to be celebrities like you’ve never seen,” White said. “I knew this was going to be massive, but it’s even blowing me away what this is doing.”

“This is going to be a monster show,” White added. “It’s hard to wrap my head around how big this thing has gotten.”

Meanwhile, oddsmakers are giving Khabib (26-0) an edge over McGregor (21-3), who is looking to reclaim the lightweight championship belt.

McGregor was previously the first fighter in UFC history to hold two belts in two weight classes (featherweight and lightweight) but was later stripped of both.

As of Friday morning, Nurmagomedov was favored to win, according to OddsShark, which has Nurmagomedov set at -160 and McGregor at +155.

Khabib has never been defeated and is believed to have superior grappling skills over The Notorious One.

But given McGregor’s ferocious stand-up skills and his history of ending things early, it could easily go the other way on Saturday night.