The former UFC lightweight champ called them “the most useless people in martial arts.” 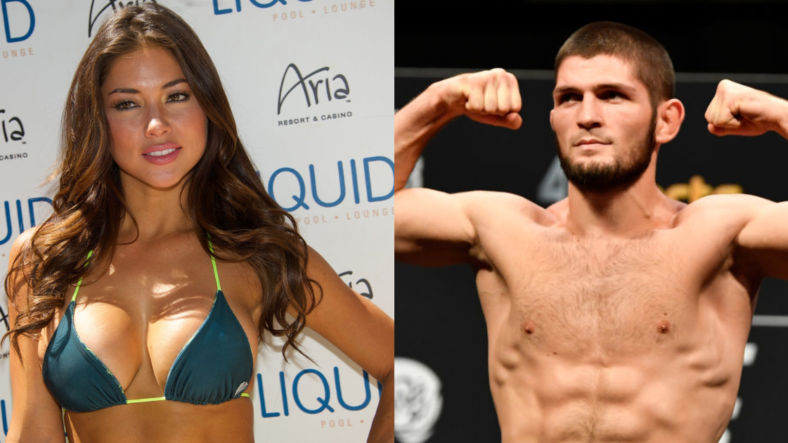 UFC ring girls go into the Octagon clad in little more than bikinis and self-confidence and some are trained athletes and fighters as well. So it’s not a surprise that after Nurmagomedov’s comments, some—like past Maxim cover model Arianny Celeste—had no problem responding to the Russian to let him know they didn’t have any use for his opinions.

Celeste’s initial reply to the fighter, made on Instagram, was just five words that said a lot to anyone with a radar for icy sarcasm: “Sorry we make u uncomfortable.”

Nurmagomedov made his controversial statements at a Moscow press conference about his new Eagle Fighting Championship MMA promotion. MMA Junkie has more:

“Look, I don’t want to offend anyone: Ring girls are the most useless people in martial arts,” Nurmagomedov said at a Moscow press conference. “What is their function? I have a question. You can show that it is the second round on the screen.“I realize that is a history (behind ring card girls). History knows many mistakes. We read history to avoid mistakes of the past in the future. If we look in the history, it says they are useless. That is my personal opinion. Dana White maybe likes it. Maybe you do, too. But my name is not Dana. My name is Khabib.”

Nurmagomedov went on to illustrate his discomfort at attending an event with his father, who died in 2020, saying, “Every person has his own preferences – the culture and values. I come to fight night (and) sit with my father. These (ring card girls) are passing by and showing people that it is the second round. But no one looks at the (round number). I feel uncomfortable with my father.”

Arianny Celeste posted a video to Instagram on Sept. 3rd that set aside sarcasm and instead made an impressive case for being empowered through her work. In the video’s caption she wrote in part:

For 15 years we have been more than just ring girls – we have dedicated time in promoting ufc and showing love and time to our die hard fans through touring the world and personal appearances . And while the world is very different right now , I can still feel that energy and love every time we have a show with an audience.It’s taken me 15 years of hard work, dedication, and time to be:•A bad ass independently wealthy female.•A real estate investor and owner of not just 1 but 3 homes/properties one located in LA -which is expensive AF .•and a female who is not afraid to take risks and build for my future.

One of the funniest responses to Nurmagomedov’s comments was—naturally—from Conor McGregor, whom the Russian fighter beat to become the UFC lightweight titleholder in 2018.

Whatever his UFC record, McGregor remains undefeated when it comes to throwing memorable shade.

If Khabib Nurmagomedov wants to forego ring girls in his Eagle Fighting Championship to feel comfortable, that’s his choice. As long as there are ring girls like Arianny Celeste, it’s a solid bet they’ll remain a part of the sport for years to come. You just have to check out some additional selections from her Instagram to see why.