The MMA powerhouse says his branded java delivers an “energy kick almost as strong as mine.” 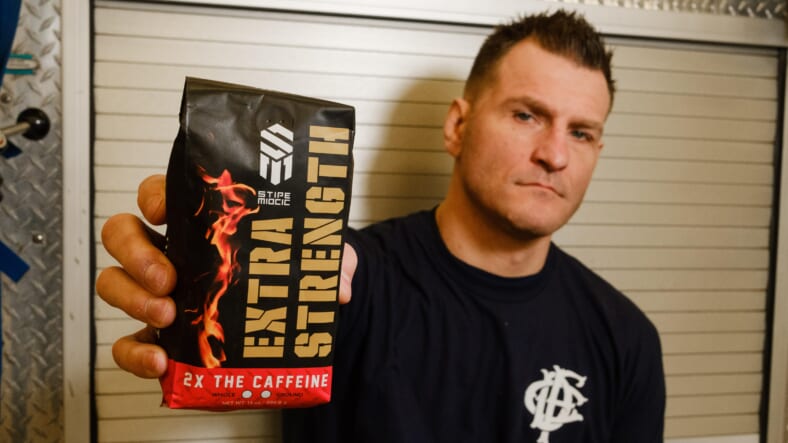 Miocic holds the record for most consecutive successful title defenses in UFC history. “The Baddest Man on the Planet” is also a part-time firefighter and paramedic, an around-the-clock profession, so he knows better than most that the world runs on caffeine.

Miocic said in a press release that he is “proud to be the inspiration for FDC’s Extra Strength Coffee.”

“Not only does Extra Strength deliver a caffeine energy kick almost as strong as mine,” Miocic continued, “the proceeds from every purchase helps support first responders in need.”

Fire Dept. is a firefighter-owned operation dedicated to the cause of making high-quality coffee. Their Stipe Miocic roast is just another addition to a popular lineup that has become a staple in fire departments and regular businesses all over the United States.

Fire Dept. Coffee veep Jason Patton noted in the same release that he sometimes “gets very sporadic sleep working my 24-hour shift at the fire department.”

“That’s why we designed a cup of coffee with enough caffeine to keep me focused and clear,” Patton concluded, “since lives truly do depend on my ability to think quickly.”

The UFC champ, Schneider said, “represents our customers who need that perfect cup to fuel their long hours and high-octane lifestyles.”