Joaquin Buckley’s brutal spinning back kick KO of Impa Kasanganay was the fan-favorite. 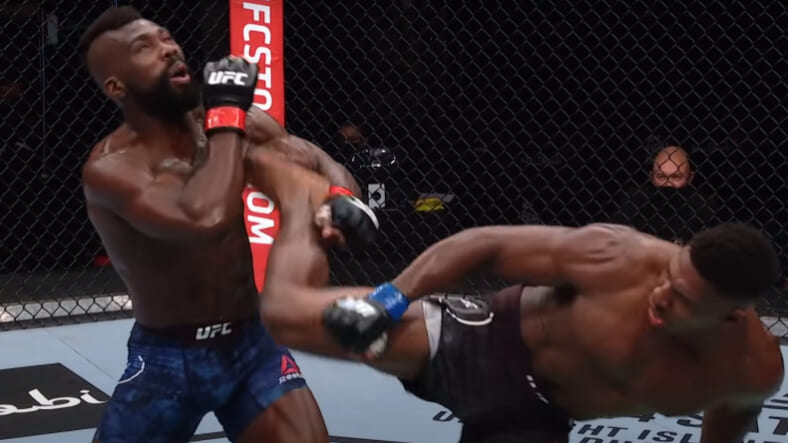 Four unforgettably ferocious KOs were up for the UFC’s 2020 “Knockout of the Year.”  But the most popular by far was the brutal spinning back kick that Joaquin Buckley landed to send Impa Kasanganay’s head straight into the mat at UFC Fight Island 5 in October. Buckley’s highlight captured a decisive 64.4 percent of votes on the UFC’s Twitter poll.

It's time to settle the KO of the Year 👊 Place your vote below!

Despite the coronavirus crisis, the world’s leading MMA promotion held a number of carefully controlled events without audiences at “Fight Island” in Abu Dhabi and the state-of-the-art UFC Apex facility in Las Vegas. The spectacular bouts featured in the video above were split between the two venues.

Australia’s Fightmag notes that the first of the three other knockout nominees occurred at UFC 250 in June, when Cody Garbrandt slept Raphael Assuncao with a perfectly placed right hand.  Abdul Razak Alhassan fell in a similar fashion to Kasanganay after Kalinn “Khaos” Williams landed a straight-right within 30 seconds of the co-main event’s start at UFC Fight Night: Felder vs. Dos Anjos on November 14. Kevin Holland put Ronaldo “Jacare” Souza’s lights out with a flurry of punches at UFC 256 in December.

If your thirst for MMA highlights hasn’t been quenched, the UFC YouTube channel has also compiled equally badass “Event of the Year” and “Submission of the Year” nominees: