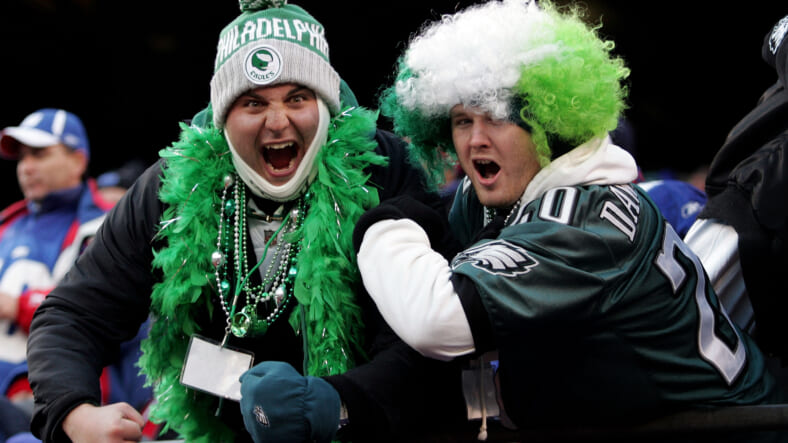 As Vikings fans prepare to descend on Philadelphia for Sunday’s NFC Championship game against the Eagles, travel agents in Minnesota are issuing a warning: Leave your purple behind.

“If the Vikings win, yes, I would take off any sort of like color,” Drew Baydala of Minneapolis-based Ticket King told Fox 9 Philadelphia. “I know it sounds ridiculous, like we’re almost talking about gangs here, but it’s no joke down in Philly. It really isn’t.”

The marketing director for Creative Charters, which is charging Vikings fans $700 for a trip to the game, added his own tip. “I would advise you not to be over-inebriated because they will be,” he said.

None of this is new for Eagles fans, who’ve been hearing about their reputation as the NFL’s most misbehaved bunch for years. The reputation is exaggerated, but it’s not unearned.

Just last week, when the Eagles hosted the Falcons at Lincoln Financial Field, a 22-year-old fan was arrested after punching a police horse. According to police, Taylor Hendricks was drunk and without a ticket when he was ejected from the stadium. Then he “walked over to a mounted officer and began punching the horse in the face, neck and shoulder area.”

That’s the second high-profile horse punching incident in Philly in the last two years. In 2016, after Villanova won the NCCA Tournament, one moron was arrested for assaulting a police horse during the wild celebrations that followed.

Still, the concerns from Minnesotans are overrated. The most disturbing thing they’re likely to see in Philly is a sea of fans in dog masks. Really.

After their game against the Falcons last week, Eagles players Chris Long and Lane Johnson wore creepy dog masks to emphasize their role as underdogs.

“Me and Chris Long were talking, and everybody’s calling us underdogs, so hey, let’s go get us a dog mask,” Johnson told ESPN. “That’s what we did.”

In the past week, fans have embraced the dog mask and soon, Amazon was sold out. But would they be allowed to wear them to the game? The team answered in the affirmative this week, ensuring that Lincoln Financial Field will be ever weirder this weekend than it usually is.

Doggone it, you better believe dog masks will be allowed at @LFFStadium this weekend. Just make sure to take them off when you go through security.#FlyEaglesFly pic.twitter.com/0REb840ME7