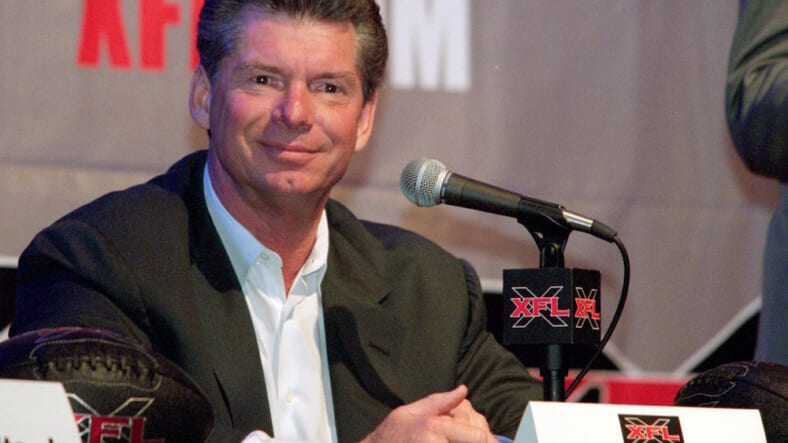 In 1999 NBC and the WWE got together to create the the most ridiculous experiment in football history, a.k.a. the XFL. It was a professional league meant to compete with the NFL.

It was an innovative endeavor, but it didn’t last long. Regardless, it sounds like Vince McMahon may be ready to try it again.

Pro Football Talk caught this nugget in ESPN’s 30-For-30 about the league, during a segment featuring a conversation between producer Dick Ebersol and Vince McMahon:

“Do you ever have any thoughts about trying again?” Ebersol asks McMahon.
“Yes I do,” McMahon replies. “I don’t know what it would be. I don’t know if it’s gonna be another XFL or what it may be or how different I would make it. It seems like in some way it would tie in either with the NFL itself or the owners.”
“Well certainly the most adventurous owner is Jerry Jones,” Ebersol says.
McMahon nods and smiles. “Yes.”

That snippet wasn’t the only evidence McMahon’s working toward a reboot. A blogger who closely follows the WWE broke the news of there will be an XFL announcement from the wrestling legend in January.

EXCLUSIVE: Vince McMahon is looking to bring back the XFL and may announce it on January 25th, 2018.

A Deadspin correspondent followed up and found that McMahon has set up a vaguely-named—and vaguely intended—Alpha Entertainment to handle non-wrestling ventures.

A WWE spokesperson issued the attached statement to me & @Deadspin in response to my inquiry about tonight's rumors of a soon to be announced XFL revival. They declined further comment. Whatever Vince McMahon's "Alpha Entertainment" is, it's self-funded & separate from WWE. pic.twitter.com/oT0Oxyi2fV

Non-NFL leagues don’t have a great history—the USFL lasted just three years in the mid-1980s. Still, if McMahon decided to give it another try, this is a different age, and he might discover a whole new fan base anxious for a change.

That, and hopefully we’d see a return of admittedly great team names like the Memphis Maniax, San Francisco Demons, and the Seattle Serial Killers.

OK, we made up the last one.