Something is definitely going on. 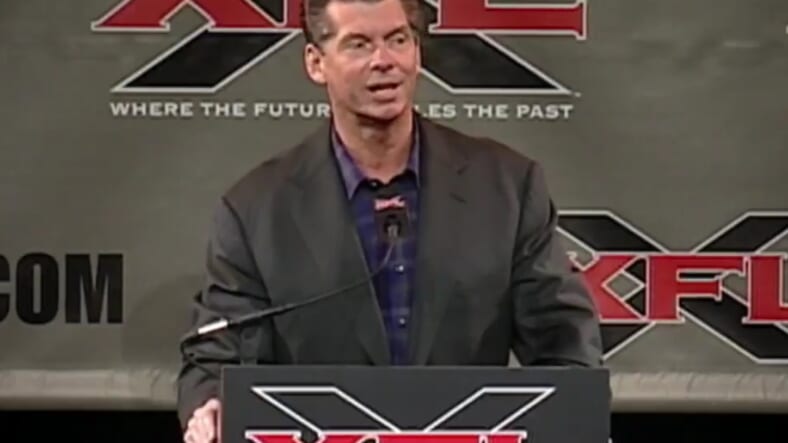 Vince McMahon has made two big moves that seem to all but guarantee he’s rebooting the XFL.

ESPN reports that McMahon has filed to sell $100 million shares in the WWE, and the sale is—according to a U.S. Securities and Exchange Commission filing—”primarily to fund a separate entity from the Company, Alpha Entertainment LLC, which Mr. McMahon established to explore investment opportunities across the sports and entertainment landscapes, including professional football.”

That’s not all, according to a tweet from ESPN reporter Darren Rovell:

So it’s very hard to maintain any skepticism regarding whether McMahon will bring back his alternate pro football league.

It’s easy, however, to be skeptical about the league’s viability, considering it lasted all of two years the last time around. Unless you are one of the following Twitter users:

Did any one see @VinceMcMahon sold $100 Million to start Alpha Entertainment, Alpha just trademarked #XFL. OK time to break out your limited edition He Hate Me jersey's. pic.twitter.com/0zqe6Ugske

But as usual, there were opposing views. Some seemed to think this a pointless or even politically-motivated move on McMahon’s part—perhaps an effort to give football fans an alternative to players kneeling in protest during the national anthem:

The XFL is going to be rebooted as "a wholesome football league for 'real Americans,'" isn't it?

everyone : god the nfl is trash

vince : so that means you want the xfl back right?

everyone : well i guess if that was the last thing on earth that was playi…

Wouldn't you think that he would re-brand it. People would just have to Google XFL to be put off by it. Plus 2001 wasn't even that long ago.

"Who's stupid idea is it to bring back the XFL" #WWE #XFL pic.twitter.com/O7Go3oSjBR

At least one guy came up with a novel idea regarding staffing XFL teams. Give disgraced but still viable players like Johnny Football a chance!

Was never a fan of Johnny Manziel, the NFL player.

No one knows what a new XFL might look like, but we’re hoping McMahon takes the “gritty reboot” approach. Spiked helmets, a trench full of piranha at the goal line, or perhaps allow each team to use one trained grizzly bear as an offensive lineman.

The NFL would collapse within months.