Watch the Top 5 Viral Moments of the Warriors Winning, and Celebrating, Their NBA Title

Did David West and Tristan Thompson kiss? It sure looks like it. 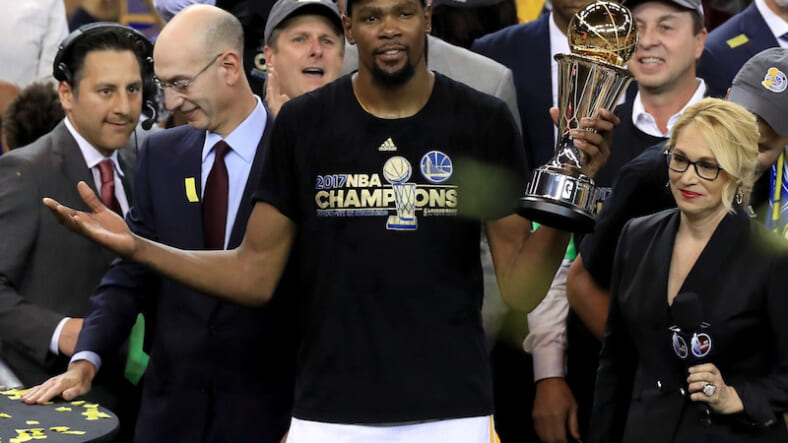 The Warriors have been the favorites to win this year’s NBA title since July 5 of last year. That was the day that Kevin Durant announced his intention to join a team that already boasted three superstars under 30.

Monday night, the favorites did what favorites are supposed to do, and rolled the Cavs on their way to their second title in three years. The game was never really in doubt, and neither was Kevin Durant’s eventual MVP. Still, it didn’t need drama to be a entertaining. Here are the five moments that we loved most.

1. The KissDavid West and Tristan Thompson nearly came to blows in the second quarter after West and Kyrie Irving mixed it up for a rebound. But instead of fighting, West and Thompson made out. Or they came pretty close to it.

Needless to say, this inspired a lot of jokes.

2. Kevin Durant getting emotional with momKD joined the Warriors to win a title, and that’s just what he did. The second best player in the world still has haters, but on Monday night they didn’t matter. All that mattered was that his mom was proud.

3. Nike gets emotional with Kevin DurantGiven how much Nike pays Durant to lend his face to the brand, it’s little surprise that the shoe giant was ready to capitalize on his MVP performance. Here’s the surprisingly good spot Nike ran after the end of last night’s game.

4. Durant’s failed chug attemptNot everything went Durant’s way last night. Here he is trying and failing to chug a beer in the locker room after the win.