“I am the pound-for-pound best fighter on the planet right now.” 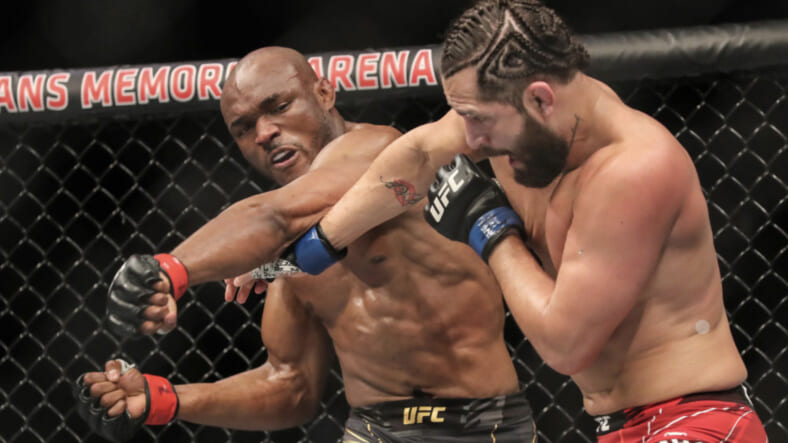 Kamaru Usman’s win over Jorge Masvidal at UFC 261 in Jacksonville, Florida couldn’t have been more decisive. It took him one full round of toying with his opponent to get there, but then in round 2 he made his statement: a brutal right that flattened Masvidal and put him into dreamland.

Kamaru Usman makes a statement by finishing Jorge Masvidal in the second round! 🇳🇬 🏆#UFC261 pic.twitter.com/Dk69ac9WXI

Here it is in slow motion.

Usman (19-1) dominated from the start. Masvidal, actually able to speak after that knockout, later said he expected his opponent’s initial approach in this, their second go-around.

But the knockout punch? Masvidal said Kamaru Usman “showed me something that he didn’t show the first fight [when] I didn’t feel his power.”

“That’s what happens when you get overconfident,” Masvidal admitted. “I thought we were going to wrestle more and I was ready to wrestle for 25 minutes but all the props in the world to him. He has got my number. There is nothing more to say. He won this fair and square and God bless him.”

Usman’s victory came in front of the first full crowd to watch a UFC event since the coronavirus pandemic began in early 2020. This wasn’t lost on Masvidal. “First time in my career,” he said afterward, “in front of all my people, my family and my friends.”

He admitted that it was painful in more ways than just the physical: “It hurts since I haven’t been knocked out in 54 fights. I didn’t fear his power and that’s what happens.”

Kamaru Usman was a fighter in control and he knew it. “With my fundamentals, I am the pound-for-pound best fighter on the planet right now,” he said.

UFC president Dana White agreed and said Usman is “one of the best ever, and he’s on his way to probably being the greatest of all time.”

At the moment only MMA legend Anderson Silva has more wins in a row than Usman. At 33, it’s likely the welterweight will overtake that record within a year.

Up next: UFC 262 will feature a lightweight title bout between Charles Oliveira and Michael Chandler. It takes place on May 15, 2021 at the Toyota Center in Houston, Texas.