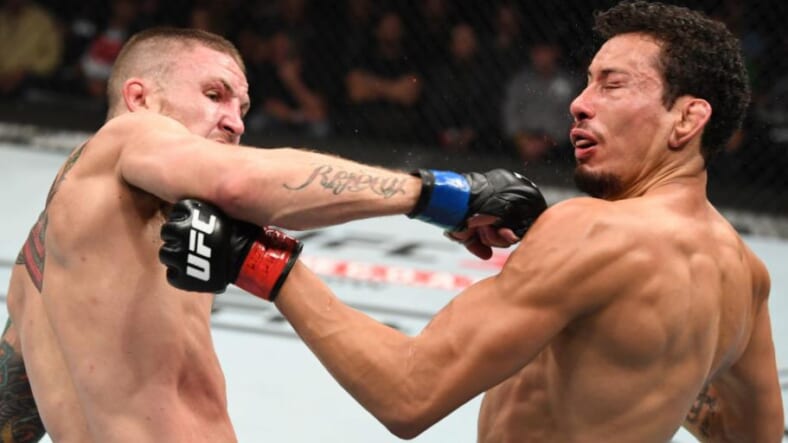 OUT OF NOWHERE 😨@8ocho08 turns off the lights with a spinning backfist #UFCMexico pic.twitter.com/C7UpBGiOZH

UFC fighter Steven Peterson didn’t look like a winner in round 1 of his Fight Night 159 bout against Martin Bravo in Mexico City. Bravo was landing blows and Peterson was back on his heels when the second round began.

Then came the knockout.

It may be that Bravo gave Peterson the idea, as he’d gone for a spinning backfist of his own. Peterson evaded him and then went in, giving a little textbook course in knocking your opponent right the hell out.

As is evident in the video, Peterson’s cold-cocking of his opponent was so authoritative the ref had to essentially bulldoze him off Bravo to prevent further damage.

This marked a halt in Peterson’s run of losses, giving him 18 wins thus far. To his credit, he clearly understood how badly he’d taken Bravo out of commission.

In a post-fight interview, he said it was his first “out-cold knockout” in MMA, which was a thrill, but he “honestly felt kind of guilty” when he went in for the finishing blow after Bravo was on the mat.

It was an eventful Fight Night, as the big main card match between featherweight contenders Yair Rodriguez and Jeremy Stephens ended after an accidental eye poke made it impossible for Stephens to go on. This apparently prompted the Mexico City crowd to throw garbage at the fighters and both were hustled off under cover by security.

That was unfortunate, but hey—Steven Peterson has one hell of a highlight reel clip out of the night and we’ve got a fine example of how to stop a losing streak with authority. Those will outlast unruly fans by a long shot.