This is silly. Obviously, they’re… 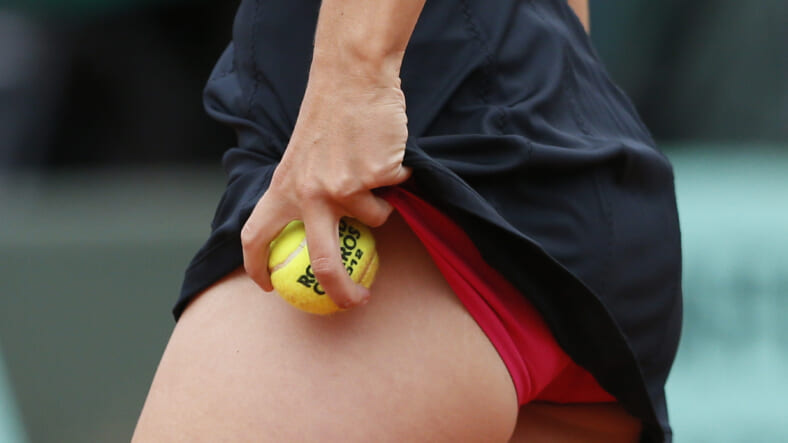 People on the internet have a habit of debating stupid things. Whether a hot dog is a sandwich, the color of a dress, and the pronouncing of GIF are a few of the all-time dumbest.

Now there’s a new one to add to the list: What color is a tennis ball.

The world is divided and people on both sides feel very strongly about the issue.

What kind of monster thinks tennis balls are green?

Even if you say, "Oh, this ball that my dog has had in its mouth for a month" looks more green to me, fine, but that's not how it started, and that's not nearly enough to say that all tennis balls are green. They're yellow! It says so on the can!

tennis balls……are yellow. this is not up for debate!

This discussion began last month in the The Atlantic, where Marina Koren, who was aghast to learn that people think tennis balls are green, dug into the question and found a surprising relationship to the notorious dress debate of 2015.

Bevil Conway, an expert in color perception, told Koren that people who perceive tennis balls as yellow, saw “the dress” as gold and white, while those who think tennis balls are green see blue and black on “the dress.”

Then Conway added another interesting theory:

Conway took it a step further, suggesting that the way people see tennis balls could reveal something about their lifestyles. Night owls, for example, spend most of their time under artificial, warm light, which means they’d discount warm colors and see a tennis ball as green. Early birds, on the other hand, get plenty of exposure to blue daylight, which means they would discount cool colors and see a tennis ball as yellow. “I’d emphasize that this is just a theory, and we’d need lots of data to support it before I’d believe it were true,” Conway said.

Perception is one thing. But what color are tennis balls meant to be? At Penn, one of the largest tennis ball manufacturers in the world, they call their balls Optic Yellow.

That’s useful information, but it doesn’t settle the debate. What might though is if an expert weighed in. Someone who’s opinion on all things tennis is infallible. Someone like the GOAT, Roger Federer. Thankfully someone asked him.

OKAY ITS OFFICIAL MY DAD JUST ASKED @rogerfederer IF TENNIS BALLS ARE YELLOW OR GREEN AND HE SAID THEY ARE YELLOW pic.twitter.com/EXdXRr0oFa

You heard that right. Even Federer is not sure. “They’re yellow, right,” Federer said when he was asked the color of a tennis ball.

Maybe this is a sign that we’re not meant to know the answer. If a man who has spent his whole life with these fuzzy little balls on his hands can’t even be sure what color they are, then how can anyone else?