UPDATED: Here’s One Theory Why LeBron James Snubbed The Undertaker Before a Recent Cavaliers Game

Is there beef between the NBA superstar and the WWE badass? 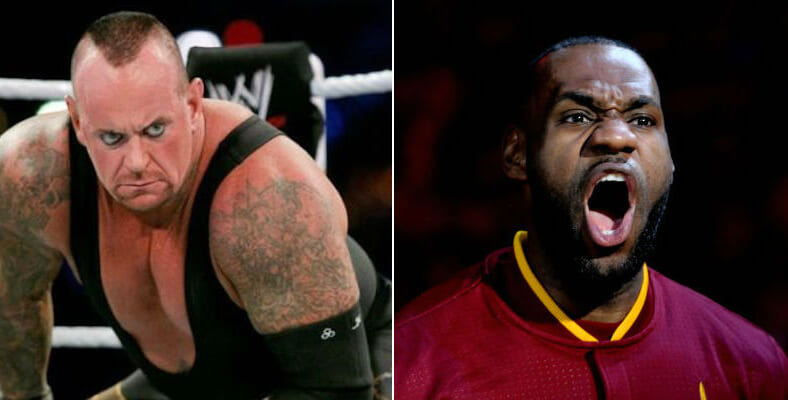 On opening night in Quicken Loans Arena, a hulking visitor waited outside the Cavs locker room to meet NBA superstar LeBron James. A superstar in his own right, the visitor was wrestling legend The Undertaker and several Cavs players stopped to say hello as they arrived at the arena.

The Undertaker is standing outside the Cavaliers locker room. Further context is unavailable. pic.twitter.com/8MWhPJarju

But not LeBron. The four-time MVP was already in the locker room by the time The Undertaker arrived, WWE cameras in tow. As the night wore on and The Undertaker kept waiting, it eventually became clear that LeBron would not emerge. But why? LeBron was clearly a fan. He wore a shirt with The Undertaker on it prior to game five of the summer’s Finals. So why not pop out of the locker room for a quick dap?

Joe Vardon from Cleveland.com has an answer. The columnist recently wrote that LeBron doesn’t like meeting with fans just because they’re famous and he especially doesn’t like to have his own stardom exploited.

Update: According to a WWE source, that’s not what happened here. Neither The Undertaker nor the WWE was trying to exploit LeBron’s fame. In fact, the Cavs arranged the whole thing. Knowing LeBron is such a fan of his, the team paid for The Undertaker to be there.

So why then did LeBron decline to meet with The Undertaker? We’ve asked the Cavs and will update again if they let us know.